I have just about finished this model of a Panormo guitar - it still needs to be varnished. I built this guitar as an extra project when I could borrow time from work on my commissioned instruments so it has taken longer than usual to complete. I always string up my new instruments before I varnish them to see if I need to make any changes - such things are easier to do at this stage. Also I think it is important to allow time for the wood and the various glue joints to acclimatize to both the tension of the strings and atmospheric changes unimpeded by a protective finish. Panormo traditionally finished his guitars with French polish and I am now ready to begin that process.

This guitar is a close model of an 1834 Panormo that I did extensive repairs on last year. My post from 7/9/14 describes that work. While the guitar was in my shop I was able to study it in detail and that provided the impetus to build a model.


I built the guitar without a mold, assembling the principal parts on plain work board, called a solera in the Spanish tradition. I enjoy the challenge and different perspective that working like this entails as the sequence of assembling the parts is much different than working with a mold. The solera  is not only a platform for assembling the key parts of the guitar but also a sort of template for determining the arching of the top. It is constructed with a depression carved into the wood in the area of the lower bout. When the fan struts are glued in place they and the soundboard are pressed into this depression. The result is a domed soundboard. Domed tops respond acoustically faster with more strength and the possibility of more nuanced tone than flat tops. The depth and shape of the depression helps to determine the tonal characteristics of the guitar. There is disagreement on whether Panormo domed his soundboards in this fashion. I constructed my solera out of well-seasoned pine, cut it to an over-size contour and taking the liberty of doming my model, carved a concavity into the pine in the area under the fan bars. 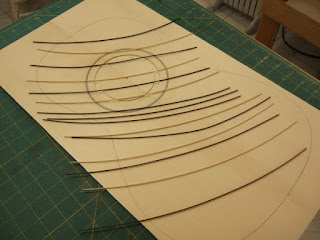 Next I thinned the spruce top to 2.6 - 2.5mm through the center and tapered the edges  at the bouts to 2.3 - 2.22mm.
The rosette is a double ring; a thin three band outer ring and a wider, multi-band inner ring composed of alternating bands of kingwood and holly wood. 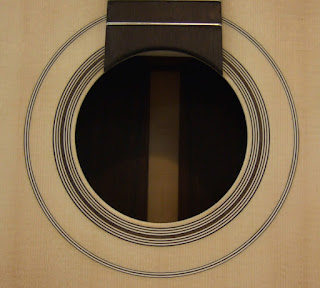 Here's the finished rose at a later stage of construction. The sound hole opening is 86mm wide while the outer ring is 137mm. The thin light and dark rings are each .6mm thick. 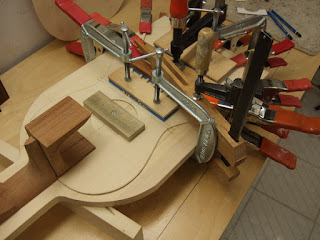 This photo shows how the fan struts glued in place. The seven struts (seen in a previous photo) are positioned in the typical fashion favoured by Panormo; bunched near the harmonic bar then flaring out to the bottom and sides of the lower bouts. I glue them all at once by using foam and wood gluing cauls to force the bars and soundboard into the concavity. Once the glue dries the lower half of the soundboard is permanently domed. 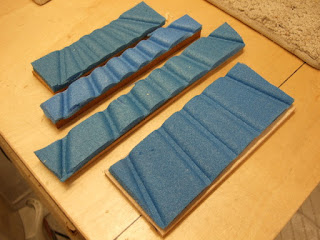 Here the cauls are laid out in order showing the depressions left from  clamping. I like this method because uniform pressure is applied over the length of the struts and they are all glued at the same time. 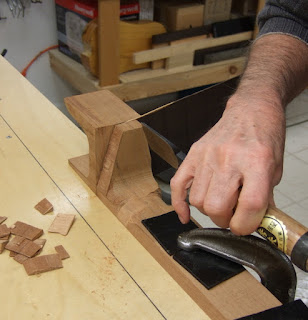 The neck and heel assembly is a key in the construction of this guitar and others that are built on a solera. The heel block and slipper foot provide structural rigidity and an uninterrupted acoustical pathway from the nut into the heart of the guitar.

Although this style of neck assembly can be cut from a single block of wood Panormo made the heel and slipper out of a single block and glued it to the neck piece with a long scarf joint. Because the scarf runs at a shallow angle (see the second photo down) there is a much larger gluing surface and therefore a stronger joint than would otherwise be the case. 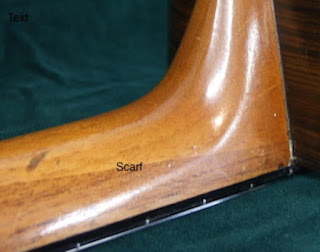 Here's a close up of the original guitar with the scarf joint labeled. 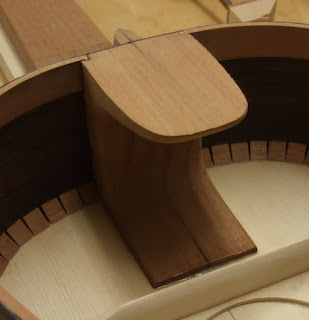 Note that the neck piece (bottom of photo) continues well past the heel and is left square on the end.  Glued to the soundboard it provides support for the top and fingerboard at a critical location and helps to produce strong clear notes in the upper register.

The slipper foot (top of photo) is rounded and glued to the back. It provides rigidity in the transition from the neck to the body.


Panormo's peg head design has a simple elegance that I admire. It is constructed from a single block of maple without a capping. The curve at the top of the string slots match the curve of the head and the long broad ramps are accented by the tapered center piece and the finely shaped edges that terminate at the nut. 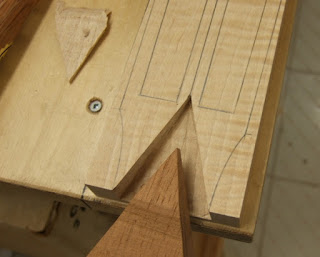 This design necessitates a blind V-joint so as to not interrupt the simplicity of the face.

I laid out the design in pencil, drilled a very small hole at the point of the V and using a x-acto saw carefully made the two side cuts using the hole as an exit point for the end of the saw.
I then chiseled away the waste portion that left a rough surface since the bottom of the V angled up against the grain. This was smoothed with a file that I re-shaped for specifically for this purpose. 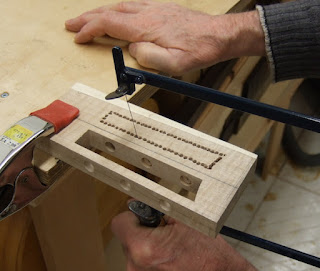 Peghead string slots are always a lot of work, more so using non-speciality tools. Here I drilled dozens of small holes on the waste side of the prescribed line and then finished by cutting away the intervening material. 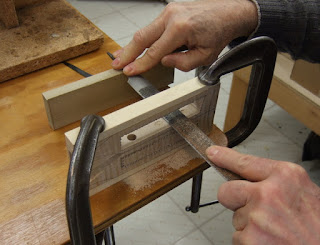 To finish the surfaces I fitted temporary edge pieces to the peghead stock to make the slots parallel to my bench. I also made two corresponding supports for the file handle that were parallel to the slot depending on its orientation. Progress was fairly rapid. 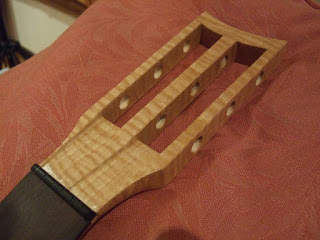 The string ramps are long but fairly shallow. They are cut below the top surface even at the nut making for a delicate rounded edge at this point.


There's lots more work to do and I'll describe that in one or two future posts.