At the end of June I was in Brussels for an appointment at the Musical Instrument Museum (MIM) Brussels to examine their large theorbo by Matheus Buchenberg, Rome 1610, Inventory number 1570.

My interest in MIM #1570 goes back to the early seventies when I was first collecting information on historical lutes. The theorbo was one of several pictured in Anthony Baines' pictorial survey: European and American Musical Instruments, Viking Press, 1966.  I still find this book inspiring and I turned to it again when I wrote to MIM to ask for an appointment.

Matheus Buchenberg was born in 1568 and worked in Rome at least from 1591 where he died in 1628 .  E.G. Baron (1727) describes him as a builder of theorbos of large proportions with a delicate penetrating metallic tone (Bletschacher).

The theorbo suffered a serious accident in modern times damaging the top and bowl. Repairs were carried out in the 1990s. The top is conserved separately which offers the opportunity to examine the internal features and construction of the top and bowl. On the other hand, it makes it difficult or impossible to accurately record some measurements.

Two features of the theorbo stand out. It is large. The length of the fretted strings and of the diapasons are approximately 99 cm and 171 cm. The bowl is approximately 71 cm long, 43.5 cm wide and 16.5 cm deep. and it is built entirely in maple, with the exception of the spruce soundboard.

My intent was to collect enough information to enable me to build a good model of the original. This included making tracings of the contour of the bowl, neck and theorbo extension; templates of the cross-sections of the bowl and of the longitudinal axis, as in the photo below; numerous external and internal measurements and numerous photographs. Throughout my examination I recorded  impressions, opinions or reservations of various observable features.

All examination implements were made of plastic, card stock with painters tape or cloth.
Most photographs were taken while the lute was inverted on the examination table.

The museum's photographs and description of the theorbo can be seen on the MIMO portal.

The bowl is constructed with twenty-one ribs of lightly figured maple, mostly sawn well off the quarter. The ribs are separated by dark wood spacers that are less than 1 mm in width. The two edge ribs are significantly wider than the other nineteen which are somewhat uniform in width. The finish on the bowl, where patches of it remain, has some substance. Perhaps it is a varnish applied over a ground. This photo includes the cardboard jig that I use to create a profile of the bowl. More on that later. Since the top is not attached to the bowl the lute lies flat on the examination table. I made a tracing and measured the result; 435 mm wide and 710 mm long to the neck joint. Note - lute bowls are prone to distortion without their soundboard glued in place, therefore my measurements should be considered approximations of the bowl's original  dimensions. 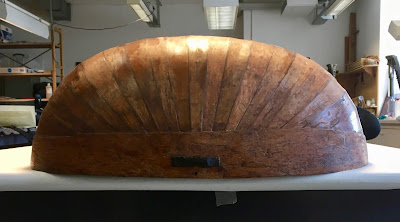 The flattening of the bowl is extreme. Its deepest point is level with the ends of the end clasp and measures 166 mm.

The bowl has been expertly assembled: the joints are tight and the ribs widen uniformly, from the center out, as they disappear under the clasp.

The end clasp is a single piece of maple measuring 740 mm tip to tip. Its maximum height measured at the center is 48 mm. The clasp is visibly asymmetrical in that the treble side (photograph's left) sits lower than the bass side. The discrepancy is not the result of the treble rib having been cut down in an attempt to improve the lute's playing quality because the clasp's finials are the same size. Also, the two edge rib's widths are nearly the same height. 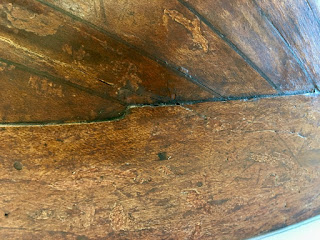 For clarity this photo shows the treble side step in the end clasp. It also demonstrates the rigorous working life this instrument endured. The surface of the bowl is full of dents, scratches, repaired cracks and a few worm holes. 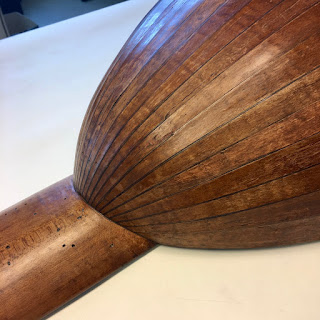 The front of the bowl displays a high level of craftsmanship as the ribs pass smoothly over the front block with joints intact and little evidence of the type of distortion caused by the pull of the strings. The rib widths widen uniformly along the arch of the neck joint and precisely abut the neck. 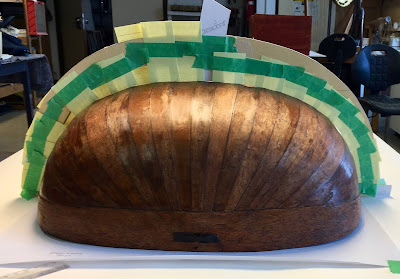 While the instrument was inverted I made two templates; the cross- section at the widest and deepest point of the bowl and a second template of the longitudinal axis (shown in a previous photo).

I made the template forms from two pieces of heavy card stock glued together to form an over-sized arch. Small rectangular tabs made from  file cards are then placed against each rib of the lute bowl while the other end overlaps the template arch. Each tab is held in place with painter's tape. Once the two edge pieces and the center piece are secured the assembly is self-supporting and the remaining tabs can be easily added . When completed the structure is light weight and accurate. 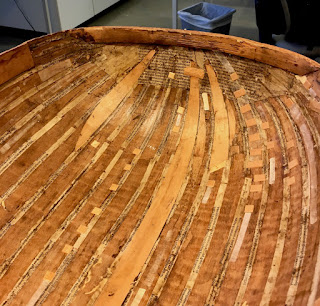 The inside of the bowl reveals an interesting history. Most of the original printed paper that covers and reinforces the rib joints remains. Also, a sizeable piece of printed paper is glued over the area just below the internal clasp. Numerous wood cleats reinforce several rib joints. The clasp itself is roughly made and is about 10 mm thick in the middle. New rib material (yew wood) has been inserted to repair  a modern day accident - the soundboard was damaged as well.

The upper left corner of the photo reveals a strip of thin wood has been applied over, and covers much of the width and length of the edge rib. The same addition was made to the opposite edge rib. 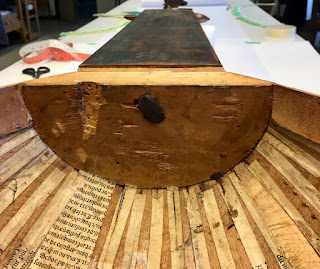 The  front block, although appearing to have been roughly made, affords a snug fit for the ribs. A large wrought iron nail pierces the block and helps to secure the neck.

The two auxiliary strips that reinforce the edge ribs terminate at the front block as seen here.

What appears to be the end of the fingerboard is visible in this photo. It is stained black to mimic the appearance of ebony. However, it is not a separate  piece of wood glued to the top of the neck but is part of the same neck material, creating a faux fingerboard.

The evidence for this is, in part, the lack of discernible glue lines around the edge and ends of the of the neck. The surface is cambered. I estimate it to be less than 2 mm in the center tapering to a little over 1 mm at the edges. 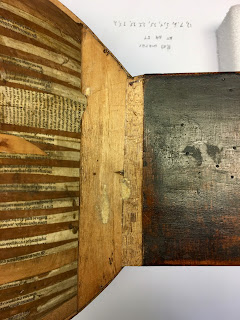 The arrow-shaped notch at the neck joint is obviously a center line indicator and an idiosyncratic example of Buchenberg's methods.

The top edge of the auxiliary strips that were applied to the edge ribs are visible. They are about 1.5 mm thick. By comparison, this this photo reveals how very thin the two edge ribs are.

I was very disappointed that my magnetic thickness gauge failed to work and I was unable to measure the thickness of the lute's ribs.

The extension is constructed in solid maple 807 mm long, 848 mm if the length of the over-lapping glue joint with the fretted neck is included. It is 73 mm wide at the point it emerges from the front of the neck.  The sides are angled in slightly so that the width of the underside at this point is 68.5 mm. The thickness of the extension at the first peg is 25.6 mm. The rear of the extension is cambered less than 3 mm diminishing to about half that under the theorbo head. 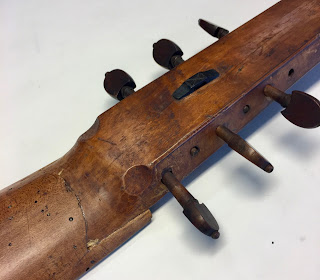 It is interesting to see the sloping contour of the extension as it blends into the neck . This is a style that is always associated with theorbos built with solid wood extensions. This is the earliest example that I have seen.

I can think of no rationale for the two depressions on each side of the extension.

There is a darkened incised line that borders the top and bottom edges of the extension. 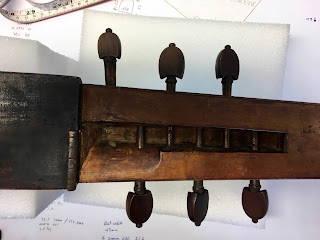 The string trough is roughly made with obvious chisel marks, although the recess for the treble strings has a nice profile. The trough is 15.5 cm long, 14 mm wide at the narrow end, 19 mm deep and 11 mm wide at the bottom of the trough.

A darkened incised line borders both edges of the top of the extension.

The peg heads are generally 20 mm wide with a maximum shank diameter of 8 mm. 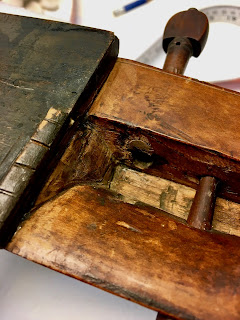 The string nut is made of a light color wood stained black. It is 43 mm wide. The six string grooves span 35.6 mm. There is a 2 mm camber to the top of the faux fingerboard.

The theorbo head, shown inverted, is roughly made. It is 53 mm high, 106 mm long and 71 mm wide at the nut support. The nut is 33 mm high and 85 mm long. The darkened incised lines that are found on the extension continue onto the theorbo head, somewhat clumsily.


This view (also inverted) shows the angle of the sides of the head. The width of the head at the widest part of the crook (see the arrow indicator in the previous photo) is 33 mm at the top and 19 mm at the bottom. 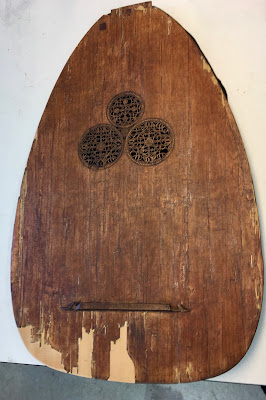 The damaged areas of the soundboard have been stablized. It is constructed from straight close grain spruce. The discoloration, cracks, scratches and other defects of age obscure the fact that this a fine soundboard that probably possessed superior acoustical properties. 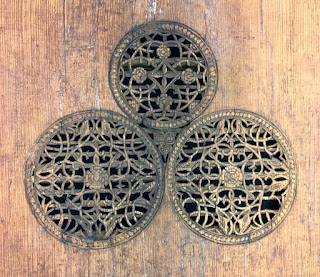 The ornate triple rose is beautifully cut and is well preserved. 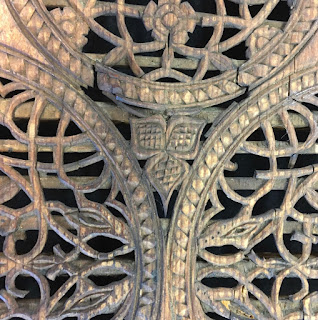 It deserves a close-up view.

The bridge is made of a light hardwood, probably maple, stained black and accurately drilled for fourteen single strings that span 132 mm. The rear face is indented to help hold the string ends while the front face is under-cut above the string holes creating a slight over-hang that helps to settle the string loops.  It shows signs of being quickly made; there are tooth-plane marks on the top surface and an incomplete chisel cut on the treble side wing. It is still a fine example of the standard design of the era combining functionality with cool aesthetics.

Some may find the treble wing proportionally too long and open, but I am convinced this is intentional. Whereas the compact design of the bass wing condenses the mass, the length and openest of the treble wing spreads less mass over a wider area. This mirrors the dimensions of the bridge which progressively concentrates the mass from treble to bass.

The bridge is 227 mm long. The top of the string block is 155 mm long on the front and 158 mm on the rear edge. The top slopes down from the rear so that the treble side at the first string hole is 6.9 mm high while the rear is 8.15 mm. At the fourteenth string hole the heights are 8.8 and 9.6 mm. The gluing surface under the first string is 11 mm front to back while under the fourteenth string it is 13.3. The string holes are generally drilled 3.5 mm above the soundboard. 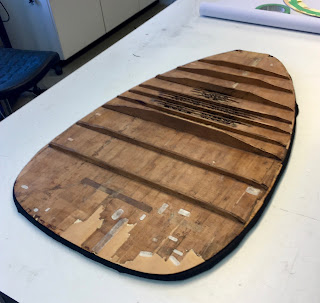 An excellent technical drawing of the top made by Stephen Gottlieb is available from the MIM museum shop . The drawing includes all bar positions and their dimensions and measurements of the soundboard thickness at numerous locations.

I bought a copy of the drawing while I was in the museum and since I had it available during my study for consultation and future use I did not examine the interior of the soundboard in detail.

In closing I would like to thank Anne-Emmanuelle Ceulemans, curator of stringed instruments, who kindly arranged my visit and to Joris De Valck, restorer and my host in the museum's laboratory.


All photos by the author