As I mentioned in my April Update from 4/20/18 I still needed to finish a few details on my Buchenberg theorbo.  I also hoped the case would arrive in time for the lute to have its coming out in a performance of Ulysses .
I got everything done but the case didn't arrive after the show closed. I am sure there will be other opportunities.

My Buchenberg is based on a technical drawing made by Stephen Gottlieb. Although Stephen based his drawing on  several instruments by Buchenberg the principal source seems to be No.190-1882 conserved in the Victoria & Albert, London. I never was able to arrange an appointment to examine this instrument but I did visit the V&A instrument gallery in 2006 and shot this photo

The V&A instrument gallery was permanently closed in 2010. I took photos of all of the lutes that were on display. Eventually I hope to post a photo story of that visit.

The technical drawing is available from The Lute Society.
Click here for the link. 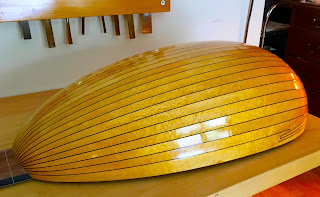 The bowl of the original (and in Stephen's drawing) is made of 41 shaded yew ribs. My stock of yew boards was insufficient for this project and my hands are no longer nimble enough to handle such narrow ribs so I built my model with 29 ribs in bird's-eye maple. I knew that several surviving lutes by Buchenberg were built with maple bowls. His large theorbo (99 and 170cm) Number 1570 in MIM Brussels is built with 21 ribs of maple. I have an appointment to examine this instrument later this month so the configuration of fewer maple ribs was an appealing option. Furthermore, the properties ( density, hardness and elasticity) of yew and birds'-eye maple are similar. I'm a fan of bird's-eye, a believer in its acoustical properties and I had large boards, well speckled with tiny eyes. 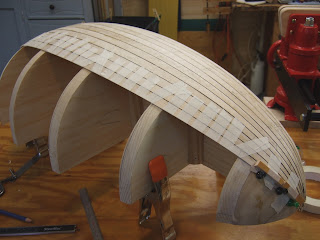 I built an open mold with a central spine and the five cross-sections that are represented on the drawing. I marked off the position of the two edge ribs and the center rib then divided the reminder of each cross-section into the required number of segments. A"segment "denotes the position and width of each rib. I did not cut facets into the cross sections since the ribs are relatively narrow and lie close to the mold in any case. 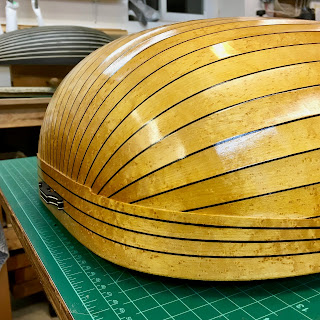 The rear of the bowl is always a difficult area in constructing both the mold and in assembling the ribs. I try to make the procedure as simple as possible. 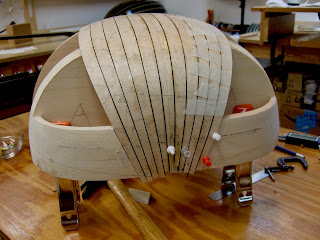 I dispensed with adding a final cross-section as I have done previously.  The shape never seemed to be quite right and its presence caused additional problems.

My technique now is the construction shown in the photo. Its shape is derived from three known profiles; the longitudinal profile (the center rib), the soundboard profile and the the profile of the last cross-section. I roughed out the shape on a bandsaw, glued the curved sections in place and finished with a fine rasp. I bent three ribs out of scrap wood each one representing a given shape; the center rib, the edge rib and an intermediate one whose curve lay between the two. These served as templates to guide the final shaping. I did not lay out the course of the individual ribs but I did mark the location of the future endclasp. As I proceeded to assemble the ribs beyond those seen in this photo I found it necessary to slightly alter the shape of this addition to the mold which was easily done. 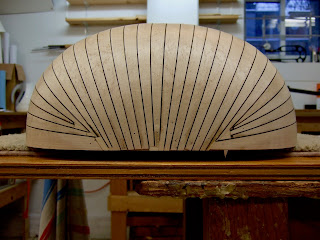 Flattened back lutes such as this one usually require that about a third of the ribs terminate horizontally rather than vertically.

It is necessary to monitor the width of the ribs as they pass under the endclasp.

When I examine an historical lute I am always careful to record the size of the end clasp and the width of each rib as it passes under the clasp. The two notches on top of the endclasp are usually an important indicator of a transition point in the construction of the bowl. 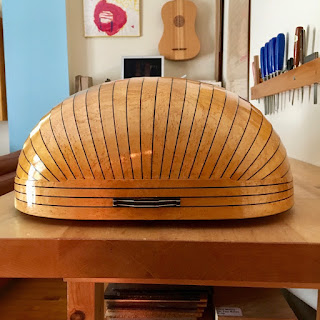 The end clasp covers the untidiness. 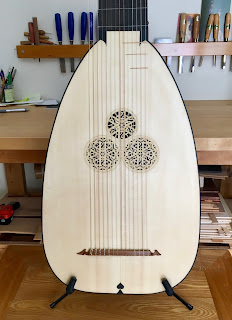 The bridge is plum with the string holes on 11 mm centers.

The belly frets are positioned according to 1/6 comma meantone. 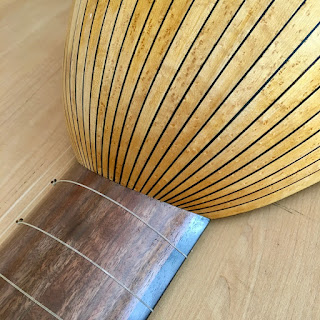 The neck is 31 mm thick at the joint tapering to 22 mm at the first fret. Its core is quartered sitka spruce. The veneer is made from Claro Walnut rib stock that I bought to use on multi-piece flat-back baroque guitars. I cut several of these into tapered strips,  and re-assembled them reversing the grain direction on alternate stripes. The pattern is edged with ebony that better resists marring from the fret knots.

This photo shows the bird's-eye maple to good effect. The finish on all hard woods except the fingerboard, that has none, is blond shellac as the base coats with garnet shellac on top applied with the French polish method. 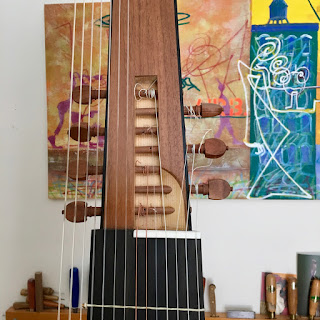 The fingerboard has a 2mm camber at the nut centered under the 6th and 7th strings. From that point the degree of camber diminishes toward the neck joint where the fingerboard is nearly flat. I also scraped a little relief into the length of the fingerboard. 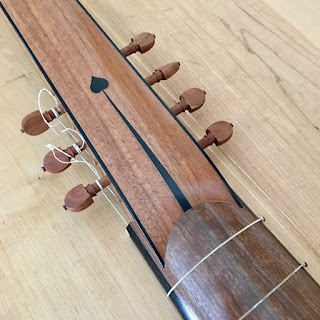 I decided to restrict my use of ebony, limiting it to fingerboards and purfling or banding. My decision is partially based tougher CITIES restrictions on Dalbergia (rosewood) and Diospyros (ebony) and a skin sensitivity to these woods that has now become troublesome.

I had been thinking about this switch for several years and last summer I found a plank of European walnut in southeastern Pennsylvania that was cut from locally grown timber. The story is told that early English colonists wanted English walnuts and brought the saplings with them. The trees' descendants survive to this day.

The extension is constructed with a sitka spruce core capped on the edges with a 5 mm thick strip  of European walnut. The top and back surfaces are veneered with the same walnut.  I sawed  all of these pieces from a large plank. 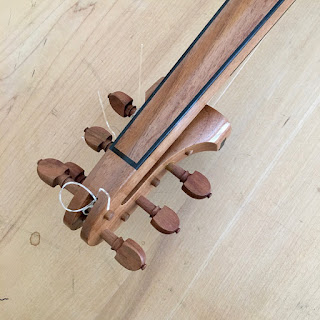 The back of the extension is cambered along its entire length while the sides taper in from top to bottom. This reduces weight without reducing strength. 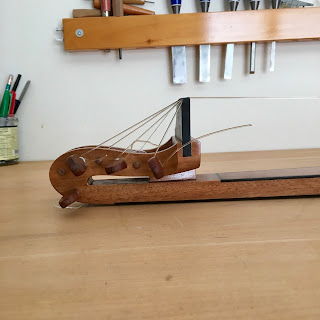 The theorbo head is a separate piece of solid walnut that is 'finish' shaped and then glued to the extension.

The tuning pegs are European plum. 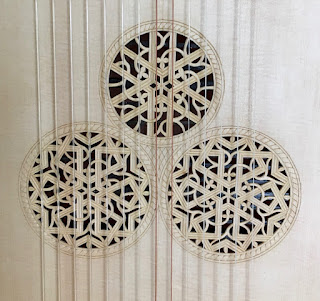 This Buchenberg has been an interesting and exciting model to build, not as daunting as one might image. Its tone is truly large yet lyrical.

All photos are by the author.