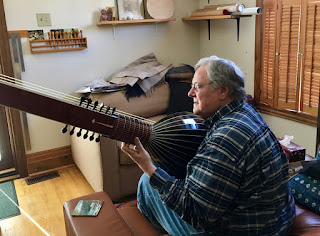 Michael Manderen, admission director at Oberlin Conservatory, avid Renaissance Fair musician and owner of a half dozen of my lutes and guitars, picked up his Tecchler archlute last week.
Although its size remains a limitation on its popularity the Tecchler remains one of my favorite lute models.  Its beauty is unsurpassed and I value its structural stability.


Now a new set of instruments have my attention. 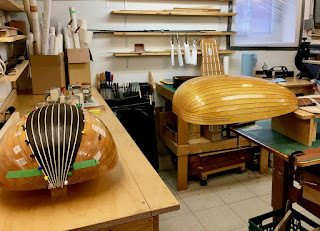 In the foreground a Kaiser theorbo bowl is taking shape. This is modelled closely after E.24 conserved in Museé de la musique, Paris. Work on it has slowed while I finish the Buchenberg
(on the right).
My shop is cramped and I don't have a dedicated space for finishing so I utilize unusual  set-ups. The theorbo spans the length of the bench and over-hangs the aisle. This is intentional as it allows me to reach every part of the bowl. I have just finished shellacking the bowl when I took this photo.
In the background is the back of a Voboam guitar that was seriously damaged after being left on a radiate-heated floor during the owner's holiday. 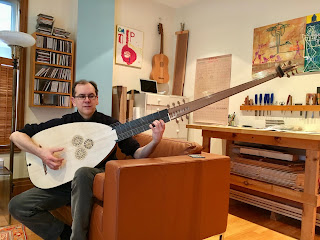 I planned to finish my Buchenberg early in April to coincide with the visits of several clients who were or are in town for various shows. Charlie Weaver was here last weekend with  Quicksilver Baroque . Lucas Harris, shown in the photo, is playing in Opera Atelier's production of Return of Ulysses along with Daniel Swenberg whose Schelle theorbo was in my December's update. It was a pleasure to listen to all three and informative to discuss their impressions. 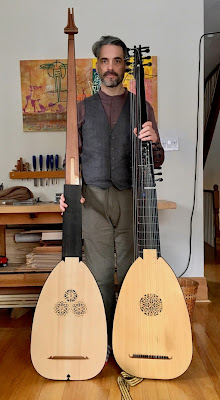 Since Daniel was here with his Schelle (his left) I though we would  make a side by side comparison. Both lute bowls are approximately 40 cm wide and 65 cm to the neck joint. The bridges are equally placed as a proportion of the belly length. The Buchenberg is built to its recorded string lengths but Daniel had me shorten the fretted length of his Schelle  from 88 cm to 86 and the extension from 160 cm to 140 for the convenience of flying. He can buy a seat for his lute as it fits under the overhead bins on planes used for medium and long distance flights.

I haven't completely finished the Buchenberg. It still needs more shellac on the extension, a higher diapason nut, final fitting of the tuning pegs and most of all the case that should arrive in the next week. If all goes well Daniel will play it in the final performance of Ulysses on the 28th.

This Buchenberg will be the subject of my next post.

This is a photo of my Voboam as it appeared when new. It arrived back in my shop with the following injuries: a 10 centimeter crack in one rib of the of the six piece back, multiple separations of the joints between back spacers and their adjacent ribs, a major separation of the back from the side ribs, a detached bridge and missing parts of the bridge flourishes and damage to the finish of the back and side ribs.

The owner has been touring extensively and will continue to do so for the near future. Therefore, I decided to give the guitar a complete overhaul. I started by detaching the back and removing the braces. This allowed me to level the affected joints one at a time by sandwiching them between two pieces of plexiglass while the glue set.

Next I'll replace the back bars and attach tiny triangular locating tabs around the perimeter of the back. These help to hold the back to the side ribs but also to insure that the back re-aligns perfectly with the side ribs when the back is re-attached. There's much more to do and the owners next tour begins May 12. I'll report further on this as a side to my next post.

More problems: Quicksilver's next show is tonight, the 20th, in Boulder Colorado. Charlie sent me this photo yesterday when he arrived in Boulder. The photo shows the joint between the fretted neck and the theorbo extension of his 2011 Schreiner built Kaiser. The lute is upside down so the fingerboard is at the bottom of the photo and the nut is the white object on the left bottom. The angled sloping form is the extension. It fits into an horizontal V that is cut into the neck  The joint under normal circumstances is reliable and easily withstands the tension of the diapasons. But, if the instrument is dropped by a careless baggage handler the joint can suffer whiplash and crack the joint  ( see arrow). This is the one area of a theorbo that can not be satisfactorily repaired. The neck has to be replaced. Fortunately Charlie has been able to borrow a theorbo for this evenings show.

All photos by the author except as noted.