Early this summer I built this Voboam model to exhibit at the Boston Early Music Festival. The design is based on the 1690 Rene Voboam, E. 2087 in Musée de la musique, Paris. I have built a lot of these always using similar aesthetics and construction methods for each one. I had been thinking about changing some of these details. Coincidently, I bought a copy of La Guitar, Paris 1650-1950, Addendum by Sinier de Ridder. Among the many photographs was a guitar attributed to Alexandre Voboam from 1657. Two features of this guitar stood out - a black neck and pegbox and a two piece back, apparently made with yew wood. The guitar also had plain ebony side ribs without ivory dividers. 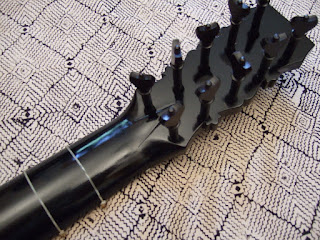 Since I have been building nineteenth century guitars with maple necks finished in black shellac I decided to use the same procedure for my Voboam. My model retains the separate peg head secured with a 'V' joint and the usual Voboam inspired peg box with scalloped edges. The pegs are castelo boxwood stained black. 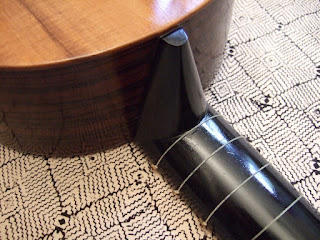 I colored my shellac with carbon black and applied it with a cotton rubber in the standard French polishing technique. However, the areas around the 'V' joint and the transition from the heel and the sides of the peghead required using a chisel tipped brush.

Note: I was curious about whether the black neck of the original Alexandre Voboam guitar was veneered or blackened in some manner. I emailed Françoise and Daniel Sinier de Ridder who kindly replied, "In this A. Voboam the neck is veneered in ebony and also the heel." Thank you. 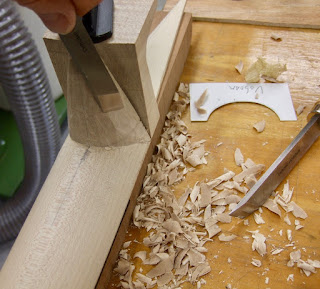 I have used different methods of attaching the neck to the body. This time I used a slipper foot style neck that Sinier de Ridder calls the "archaic" method. They explain that this was the Voboam family's standard procedure. This was an important take away from  La Guitare.

Here I am using a pair of skew chisels (left and right bevel) to shape the heel. These chisels simplified the shaping of the contour particularly in the transition from the heel to the shank of the neck. 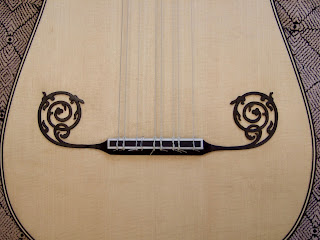 I am not a good draftsman  so reproducing the design for the moustache has always troubled me. 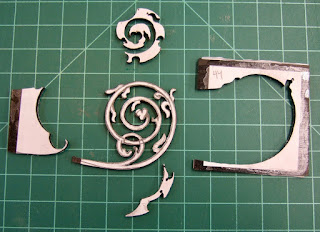 But I developed a good technique for replicating the spiral shape that defines many baroque guitar moustaches. I use tin solder as a flexible ruler.  This is the stuff used to connect copper plumbing pipes or electrical connections in electric guitars. It is easily shaped into a spiral and most importantly it holds its shape.

Tracing around the circumference achieves the basic design. I filled in the appurtenances free-hand.  The moustaches are cut from a assembly of two pieces of ebony 1.2mm thick. The pattern is glued to one face while slips of paper are glued to the opposing face and between the ebony  pieces. I used a hand scroll saw to cut the pattern.  While the assembly is still together I round the edges with various small files. The two parts are separated and the paper removed by dropping them in near boiling water for a few seconds. Everything floats apart and as long as the moustaches are rescued quickly no harm is done. I allow the new moustaches to dry sandwiched and weighted between two pieces of plexiglass. 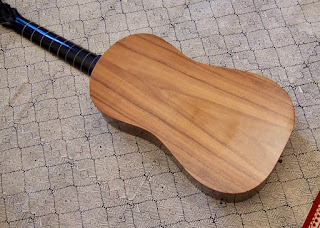 I didn't have a suitable piece of yew for a two piece back but I have been saving a small stock of this beautiful koa for special projects.

I finished the guitar with shellac using the French polishing technique. The soundboard received multiple coats of tung oil.

Coming Up. I am working on a model of the David Tecchler archlute that will be finished soon. I examined this instrument in the Metropolitan Museum of Art, NY in 2000.