The last several months has been a busy time: After I finished a model of the 1690 Voboam guitar that my client picked up at the end of January I started another one but with changes in the aesthetic and internal construction. I am nearly finished with a new Stauffer based on an early (1822) "Legnani" model. And I finished a model of the large, powerful German theorbo by Sebastian Schelle 1728.

Early in April I attended the Long Island Guitar Festival at LIU Post. Harris Becker, the festival director and owner of my 7-string Stauffer, invited me to show my guitars. Raphaella Smits was one evening's featured performer in a program of Ponce, Mangoré and Mompou brilliantly played on a 1980 John Gilbert. Raphaella performs regularly on 19th century guitars so this was an opportunity to ask her to critique my work. We met after her master class with Harris and guitarist Huy Thanh Nguyen. Raphaella was generous with her time, thoughtful and direct in her comments. There were many take aways; nut width, string tension and string choice among the practical. 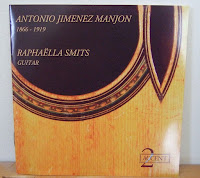 The inspirational was the gift of her CD of Antonio Jimenez Manjon played on a 1899 Vicente Arias. The music is at times "dreamy" but also "rough and virile" to quote adjectives Raphaella uses to describe his music. The guitar is very lightly constructed with a long string length of 72 centimeters, Its tonal characteristics, to my ear, embody the period's spirit: vitality and sentimentality. The guitar's uniqueness beckons adventurous luthiers. 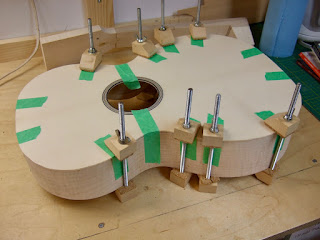 My 1822 Stauffer (the neck is in the background) has progressed since this photo was taken. The purfling is finished and the body is just about ready for French polishing.

I had built several examples of this large theorbo, using the museum plans, before I examined the original in Nüremburg in 2005.  Earlier I thought there were several odd features in the instrument's construction. These were clarified when I studied the original. My post will include material from that visit. The string lengths of my model is 86 and 140 cm while the bowl is 41 by 65 cm.

The baroque guitar  that I finished in January was my usual 1690 Voboam model . But I made several changes in the aesthetics and construction features . My newest Voboam will have different features too. I'll compare my work on those two guitars  and explains my thinking about them in a future post.

All photos by the author except as noted.