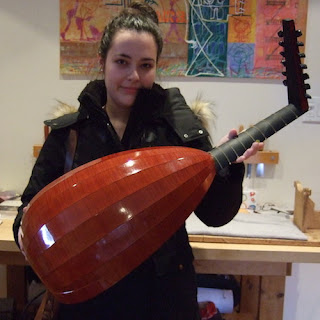 It has been a while since I last posted, but that doesn't mean that I've not been busy. Before I describe my work I want to mention a nice surprise.  Fiona Thistle, whom I had not previously met, stopped by to get an endpin for her lute. Fiona who has been playing since the age of 10 (!) bought the lute second-hand for her studies at university so I didn't know which of my lutes she had. I was delighted to see that it was one of my red Gerles from 1995. The Hans Gerle model was my go to renaissance lute from about 1983 to 2000. Most of them were varnished with  a cooked resin varnish in shades from amber  to chestnut. Occasionally, I added red madder as is obvious in this photo. Making the varnish is a  cottage industry and instrument makers usually make their own. However, I was always hesitant to do this as making the mixture is a tricky and dangerous procedure. Luckily one of my students from my teaching days had access to a university chemistry lab's extraction chamber so for a time I had a reliable supply. I also bought the prepared varnish from Northern Renaissance Instruments (England) until Canada Post banned the delivery of hazardous materials - my last shipment was confiscated. I'm always amazed by the appearance of this varnish - translucent, vibrant with incredible depth.

I have just about  completed a seven string Lacôte guitar except for the finish. I combined features from two Lacôte multi-string guitars that I examined in the last several years. This guitar cried out for a set of Rodgers replica tuners. The gears of the tuners are concealed in the peghead (see following photos) and fitting them was a lot of work, but well worth it.

In my next post I'll have photos  and descriptions of this work, information about the two historical guitars that I consulted as well as my usual construction descriptions and photos. 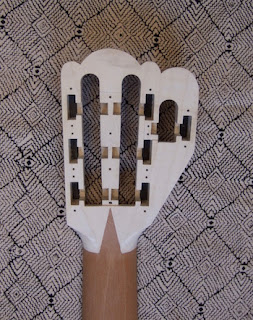 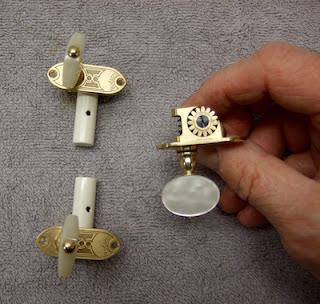 The gears fit in the rectangular slots while the string rollers sit in the cut-outs. A central cover plate will conceal the roller ends. 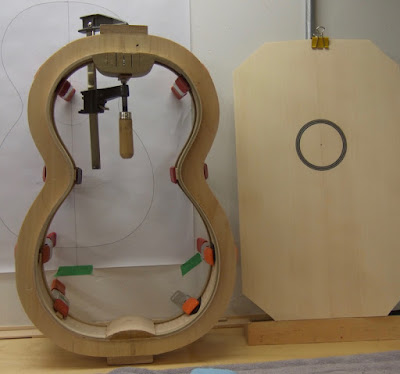 I've also gotten a good start on another 7 string, this one after Johann Stauffer, 1827. The model (G24) is described with photographs of the front, back and side profile and complete external measurements in Stauffer&Co., The Viennese Guitar of the 19th Century.

All photos by the author