I finished an eight course lute with an eleven rib curly maple bowl and a string length of 63 centimetres. My client for this lute is a classical guitarist who also plays lute and baroque guitar. He plays with short, but not too short nails.  I didn't think the usual Frei, Hieber or Venere renaissance models would be suitable for him. I needed a lute with good projection and a sort of sturdiness that a player with nails requires.

My post from 10/25/14 describes using the archlute C.45 as the basis for an eleven course lute. I still had that lute on my mind when I started to plan the new eight course. However, C. 45 has thirty-one ribs of yew and I thought a lute with fewer ribs and ribs of maple would be a better match for my client.

I could have adapted the bowl of C.45 to eleven or thirteen maple ribs straightaway but it seems reasonable to think that there might be an unheralded 16th century lute in some museum's storage that fits my requirements. I enjoy undertaking projects like this and fortunately there are resources online that simplify the search for 'new' lutes. The Lute Database  assembled by Klaus Martius and hosted by the Lute Society of America lists hundreds of lutes categorized by maker. Each entry usually lists the lute's location, description and many important measurements. I surveyed the list of lutes attributed to Magno Tieffenbrucker and sure enough in the Museum für Hamburgische Geschichte was Lute ID 246 . The length, depth and width of the bowl of this lute compare favourably with C.45 .  Missing from the Database description of C. 45 is the depth which, on the museum's drawing, is 15 cm. Also, it is constructed with eleven ribs of yew. Now I was hopeful that I could find a photograph.

There are thousands of images of lutes online but none of the Hamburg lute. I was only a little disappointed.  Museum catalogues often include photographs and the MHG had published one  in 1930. I could not find a library copy but I was able to buy one from a German antiquarian.

Alas, there were no photos but there was an interesting difference between the Database entry and the catalogue. The former lists ribs of yew while the latter records  "rötlich lackierten Ahornspänen" (red varnished maple ribs). This was getting interesting but I still needed a photo. I emailed the museum's curator and asked for details about the lute and inquired if photos were available. 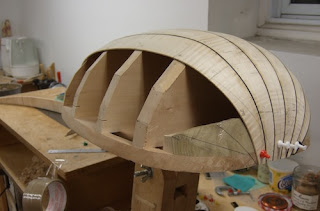 My self-imposed deadline for starting the lute came and went without receiving a reply so I reluctantly made a new mold copying the size and shape of C.45 but adapted for eleven ribs and got started. I'm still hopeful that I'll obtain photos of the Hamburg Tieffenbrucker and when I do I'll pass them along. 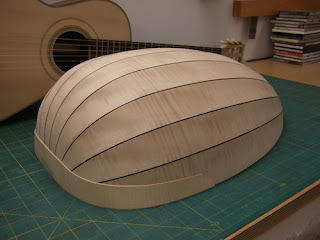 I've always found that there is a problem with open molds in the transition from the deepest part of the bowl to the area around the apron.
Because the curvature of the bowl changes so quickly at this point it is difficult to make  accurate intermediate cross-section supports. For this mold I avoided the problem by leaving the area open, but I compensated by adding a shaped internal support for the apron area and by making three rib bending jigs: one shaped to the longitudinal axis of the bowl, a second to the profile of the soundboard and a third to a contour intermediate to the two. 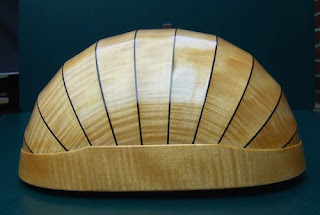 By using each in its turn with slight compensation I was able to shape and assemble the ribs over the difficult rear portion of the bowl in a uniform manner without further use of templates or jigs.

Since the construction of the neck, soundboard, pegbox and other features follow my usual methods that have been described in previous posts I'll show you details of the completed lute. 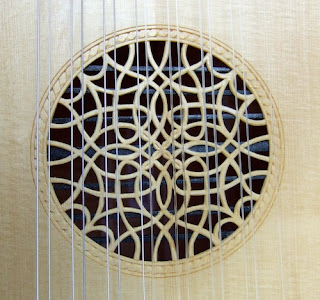 I cut the rose with x-acto knifes and scalpels. As I worked through the pattern I gave the cut areas a wash of thin shellac. This sealed and strengthened the fragile wood fibers.

The bridge is made from plum capped with ebony and patterned after the Hieber bridge in size and design lengthened to accommodate eight courses. 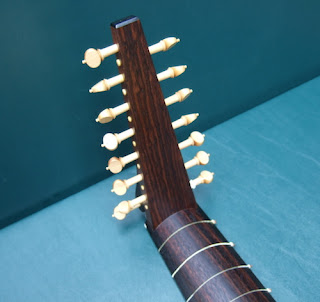 The neck core is sitka spruce veneered with a broad centre piece of Indian rosewood. The edges are protected with veneers of ebony. The pegs are boxwood. 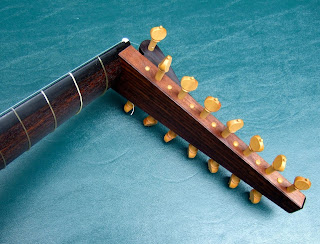 The rosewood veneer continues on to the back of the pegbox. The pegbox core is walnut. I seldom add a chantrelle bracket for the first string on eight course lutes. But in this case I thought my client would appreciate the addition. 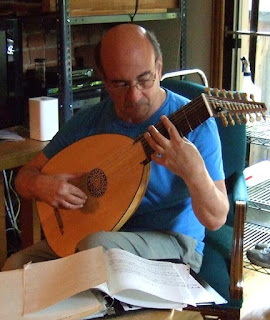 Harris Becker is Director of Guitar Studies at Long Island University Post and the founder of the Long Island Guitar Festival. He is co-founder and artistic director of Songe d' été en musique in Quebec. This summer the festival celebrated its tenth anniversary.
Congratulations!

Shortly after taking the lute home Harris wrote:
"The lute has been a big hit with people...!!! I am having a great time with it. I feel like I have a little consort in my hands."