For many years the Royal Ontario Museum had a European musical instrument gallery that I frequented, visiting my favourite instruments.  Among them was an important mandolino by Benedetto Sanbretto mentioned in The Early Mandolin by James Tyler and Paul Sparks, Oxford University Press. Unfortunately the instrument gallery was disbanded during a re-organization and the instruments were put in storage or made cameo appearances in period room vignettes. I lost track of the mandolin but recently happenstance renewed my interest and I contacted the ROM. Last month I was able to spend a delightful and engaging afternoon  examining the mandolino.

Note: today there are many types of mandolins. This instrument, a mandolino, should not be confused with them. It is similar to a small lute in that it exhibits lute-like characteristics: a flat top, affixed bridge, rounded bowl and gut strings plucked with the fingers. The term "mandolino" and its tuning ( g'', d'', a', e', b, g) both which suggest its diminutive size, were first mentioned early in the 17th century.

The appearance of the Sanbretto mandolino is a combination of elegance and simplicity.  Its elegance undoubtedly has inspired generations of delighted owners - it was built in 1726 - and simplicity is found in its proportions and uncluttered  soundboard.  It is a fine example of the type of instrument that was popular in the 18th century. Antonio Vivaldi (1678- 1741) required mandolinos in many of his compositions and  the concerto for solo mandolino (RV 425) and the double concerto for mandolini (RV 532) are among his best known works.

In fact, Vivaldi is responsible for the 'happenstance' that occasioned by visit to the ROM. A client, requiring a mandolino for an upcoming engagement, inquired whether I had one available. I didn't, but I decided I should.

My study included measuring, photographing and describing the instrument's major features. I also drew a contour outline of the bowl, neck and peg head.  I have started to build a model and I will describe my progress in future posts, but now I want to show you the Sanbretto in detail.

The fingerboard is a profusion of geometric shapes and engraved panels all cut from mother of pearl. Each edge of the fingerboard is lined with a row of chevrons-like forms, followed by a narrow  ivory line and then a row of diamond shapes all set in black mastic. A double line of ivory and ebony completes the edge motif. The engraved panels are bordered by a flowing band of chevrons. Each panel is representational. For example the top most panel is clearly a flower and a winged dragon  makes an appearance but others are more fanciful or fantastical. The display seems to have been made as one long vertical panel because engraved lines from each  "scene" flows into its neighbor. The embedded ivory frets separate the scenes.

The next three photos are close-ups arranged from the top of the fingerboard to the joint with the body. It is a stunning display. 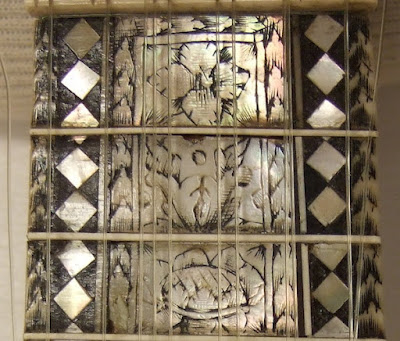 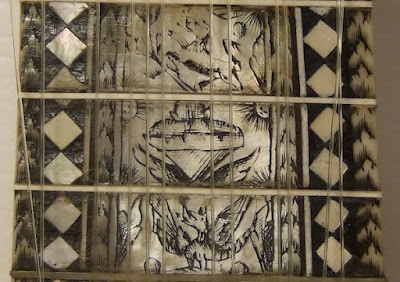 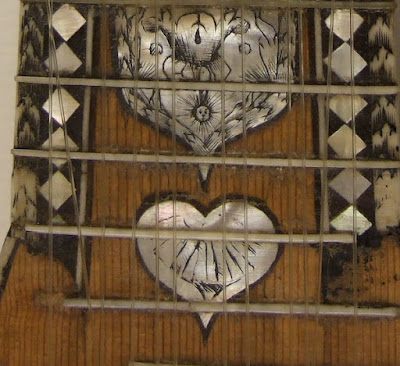 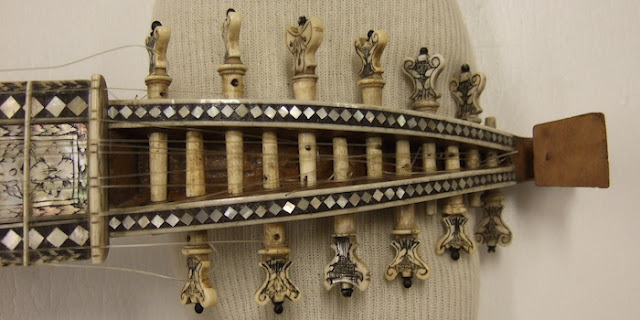 The diamond motif continues onto the sides of the peg head. There are twelve ivory pegs with engraved designs. Black mastic has been rubbed into the lines to emphasize the designs. 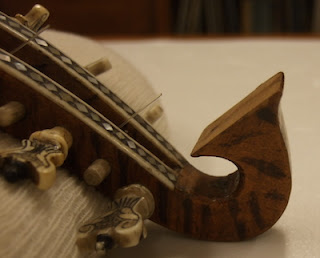 The peg head is slightly curved and tapers both in width and thickness before it curls back on itself. 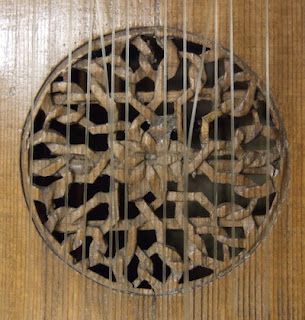 The soundboard is fine grain spruce and is undecorated except for a thin double band of ivory and ebony around the edge. The rose is pierced through the soundboard and is an excellent example of "Leonardo's knots" - a design that appears on many lutes from the 16th -18th centuries. 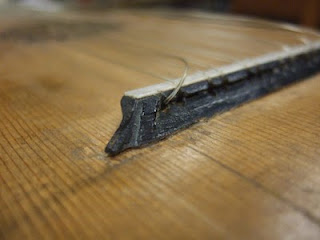 The bridge appears rough in this photo, because the black substance (paint?) that covers it is corroded. But I believe it is original. The reason for this is that it has all the characteristics of a 17th-18th century lute bridge. It is narrow, front to back and low, allowing the strings to sit close to the soundboard. There is a ledge cut into the rear that catches and secures the free end of the  strings as they are looped over the bridge. The string block, the central part of the bridge, is covered by a thin ivory plate.  The top of the bridge slopes forward (not visible in this photo) and this has to do with vector forces but I won't go into that. Customarily the  ends of the bridge taper to small finials but both have broken off. Stains on the soundboard strongly suggest that the bridge has detached and been re-glued.

The bowl, neck and peg box are all constructed of tiger stripe maple, named for its closely spaced deep curl . The top coat of finish is a little too glossy for me - my guess is that it is a modern application - but  underneath the wood has developed a beautiful rich brown patina. The neck and pegbox in this view are both undecorated but the gentle arch across the back of the relatively wide neck and the rounded edges of the pegbox are sure to please demanding musicians.

The bowl has thirteen ribs. The two edge ribs are very wide while the remaining eleven ribs are narrow and deeply fluted. Ivory lines that are nearly 2mm wide separate each rib. 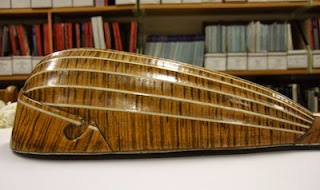 This view shows the contrast in rib widths.
At the deepest point of the bowl the two edge ribs are 34mm wide while the remaining eleven ribs are between 13 and 14 mm wide.

(Below) I wanted to know the general shape of the bowl so I made a template of a semi-circle from heavy cardboard. Held in position (not quite accurately) over the deepest point of the bowl the photo suggests that the eleven fluted ribs form a semi-circle. The increased width of the two edge ribs add more depth to the bowl. As a result the instrument is louder with a fuller tone. 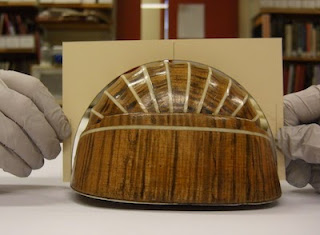 The end clasp is 50mm high and is assembled from two pieces of maple with an ivory line. The vertical surface of the wider piece of the clasp is flat. The smaller piece follows the curved profile of the bowl. The size of clasp suggests that it is needed to cover the end points of the ribs.


I would like to thank Jennifer Kinnaird, Collections Technician (European) for kindly arranging my visit. Jennifer's assistance during my visit and on my follow-up requests was invaluable.

All photos by the author except where noted. 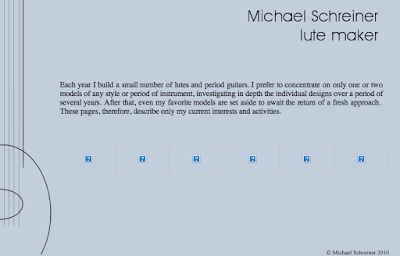 I am shutting down my website www.schreinerlutes.com/.  It has gotten old and cranky and has developed glitches. On some new devices it does not display at all. I do plan on replacing it eventually, but in the meantime, my interest is here, with my blog.
Posted by Michael No comments: