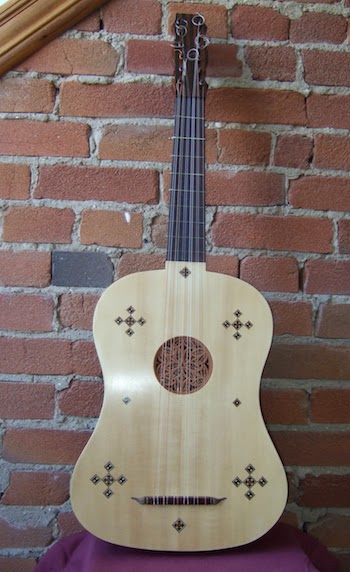 My last post described the emotions I felt while viewing the original vihuela (E.0748) in the Musée de la musique laboratory. Building a model was an unique experience because we - modern luthiers -  seldom have the opportunity to copy such an old instrument. Especially one that has not been altered in modern or near modern times. I went on to give a talk about the Chambure vihuela at the Lute Society of America Seminar.
LSA Summer Seminar 2002
and to publish an article in the LSA Quarterly, Volume XXXVII, No. 2&3, November ,2002.

I had built a second model of the vihuela to exhibit at the seminar that Dick Hoban, then president of the LSA, subsequently bought. It was his suggestion to inlay the soundboard with motifs from Luis Milan's  El Masetro. 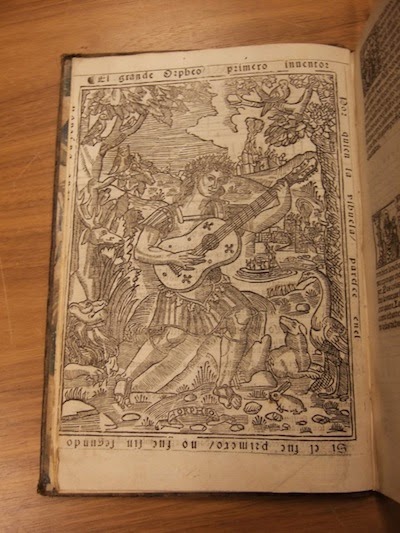 I returned home with the instrument and  thought about how to go about the task. There are numerous images available of Orpheus playing the vihuela taken form El Maetro and I could have used one of those.  But I found  a copy of the original 1535 edition in the Library of the Royal Ontario Museum only a few blocks from my home here in Toronto.  The copy is now in the University of Toronto Music Library, Rare Book musi F-3 120.

This discovery was a nice touch as it added another dimension to my experience with the historical vihuela. From this image I chose the general configuration and placement of each inlay, but the images were not detailed enough to produce an historically accurate inlays. The patterns are similar to those on the Jacquemart-André vihuela. I had purchased museum photos of the instrument for my LSA talk but there were no close-ups so I needed another source.


I found that Auvidis/Astrée had re-issued Hopkinson Smith's recordings of Milan, Narvaez and Mudarra's fantasias in this beautiful three CD box set with this close-up of the Jacquemart-André vihuela. Here is the image I needed.

A close-up of the four point star shows the colors and configuration of the design. I set about choosing the woods I would use and working out the exact size of each part. 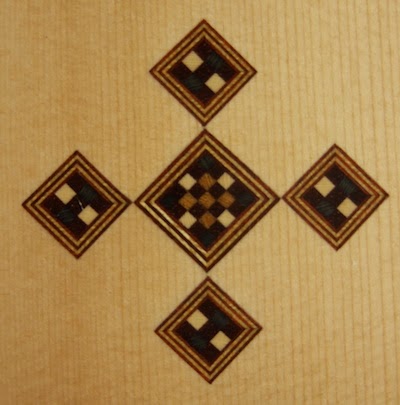 My colours have darkened and my green is hardly visible in the photograph.  In contrast, the vibrant colours of the original are a testimony to the skill and knowledge of the dyers trade in times past. My border is made of bloodwood and canarywood strips that I manufactured. The interior squares are boxwood, holly, holly dyed green and rio rosewood. 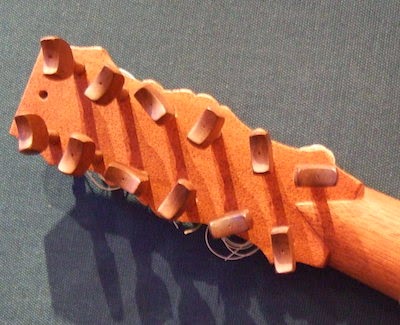 There are other features of the vihuela that I didn't report on in my previous post that are no less surprising or unique. The peg head appears to be attached to the neck with a V-joint. In fact it is a false joint. The neck and peg head of the original instrument are carved from a single block of wood. The anonymous vihuela maker used Mediterranean cypress for the original while I used Spanish cedar. 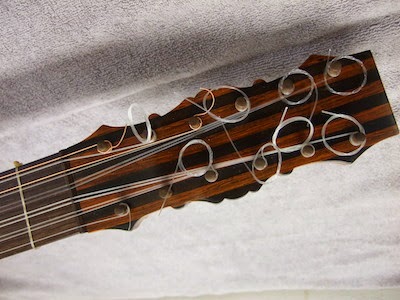 There is no face plate on the original  Chambure vihuela but the peg head plate on the Jacquemart-André vihuela is deceptively elegant and I chose to include it on my model. The plate is composed of an equal number of alternating strips of contrasting wood resulting in an unbalanced design: the treble side is edged with ebony while the bass side with rio rosewood. 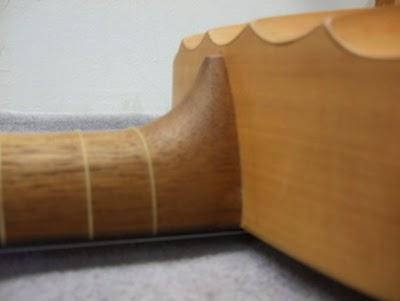 The Chambure vihuela along with examples in the iconography of lutes, viols and violins demonstrate that ancient builders valued thick necks, although modern builders are reluctant to copy this feature. The width of the Chambure
vihuela neck is not unusual; measuring 44mm at the nut and 58mm at the joint with body, the thickness at the last tied fret is 31mm including a thin fingerboard. This is hefty. 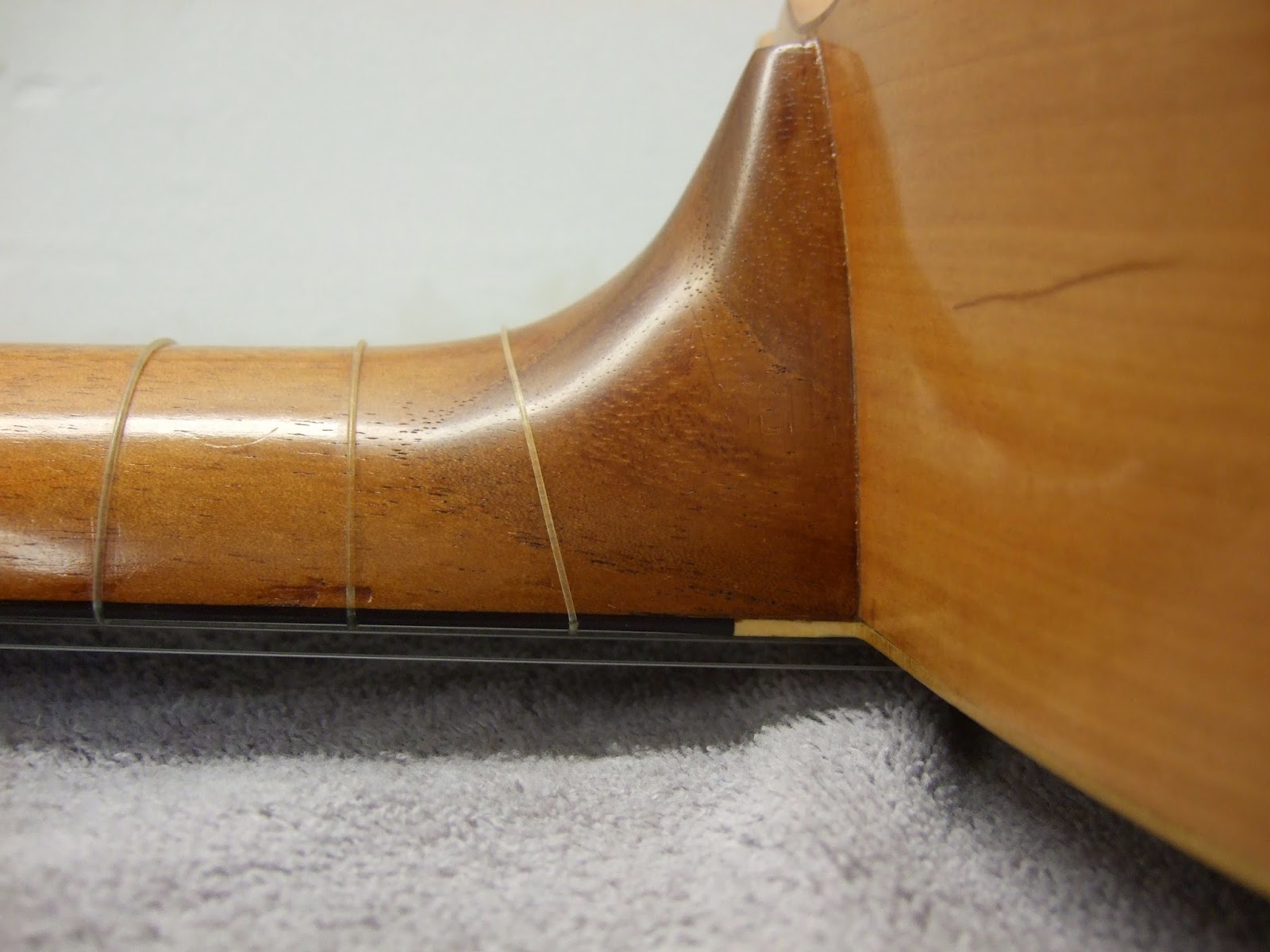 I think extra wood imparts a distinctive colouring to the tone of this vihuela. I've said as much in previous posts about the effect of instrument necks on tone. Some modern players agree with the theory but dislike playing on them. So I built subsequent models with thinner necks.

The decorative tips of the bridges of early instruments are often imaginative and sometimes symbolic.

A bull's horns are represented by the up-turned bridge tips and undulating folds that encompass them. 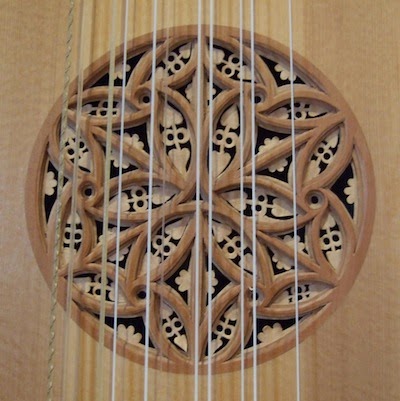 This is the inset rose from my first Chambure vihuela copy. It is cut from  two layers of pear wood and and a third of coloured art paper. 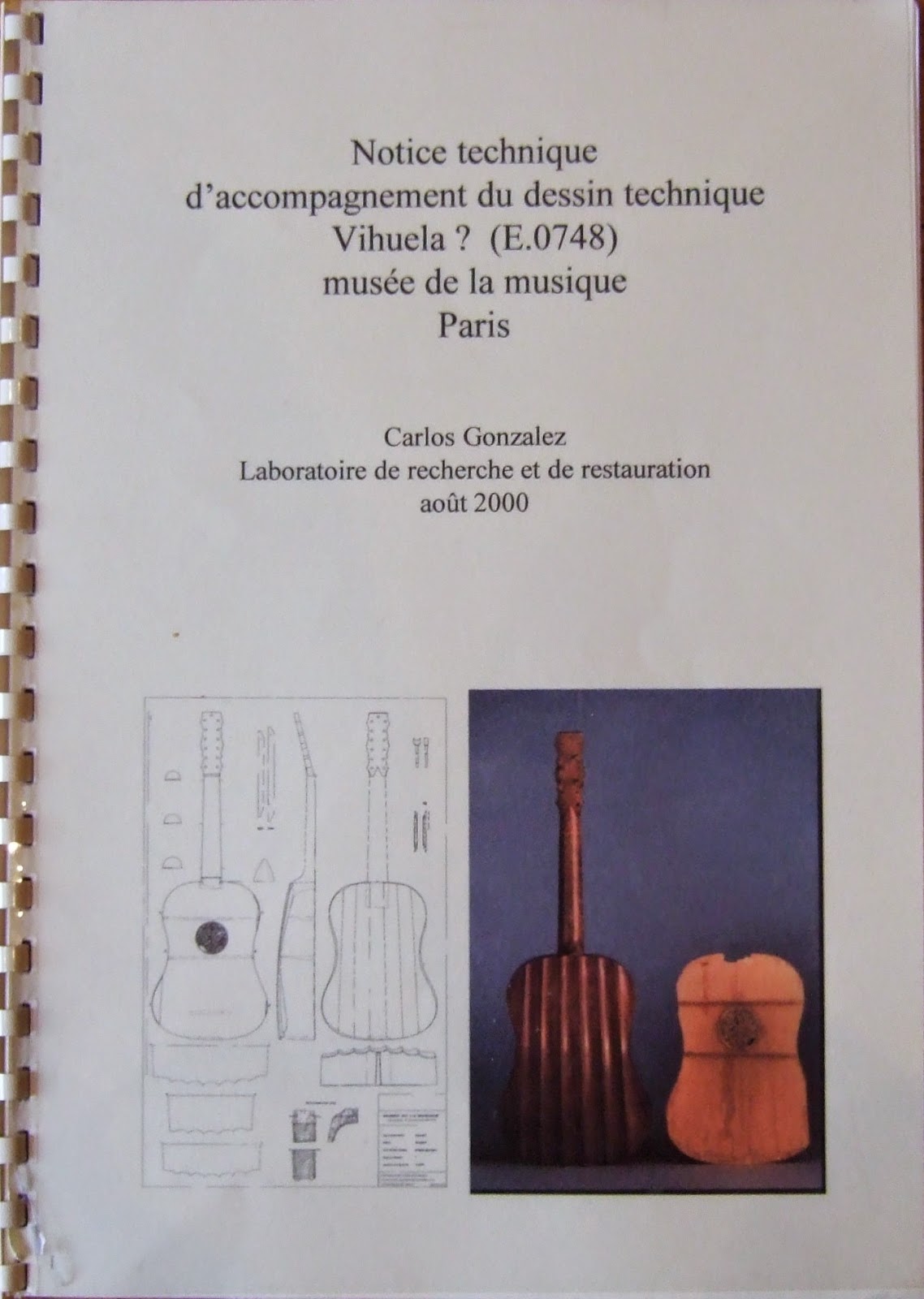 If you are interested in building a model of this  instrument or appreciate drawings of important musical instrument a large single sheet technical drawing of the vihuela, E.0748, is available from the museum. Also included is this booklet of technical notes. Contact:
musée de la musique
*****

All photos by the author