Throughout my career I built the occasional vihuela at the request of friends or clients. As there were no suitable surviving instruments to model the vihuelas I built were based on iconography. Although I achieved some nice results, I felt  they strayed a little too far from historical plausibility.

The emergence of an historical vihuela from the storage vaults of the old Paris conservatory in the late 1990s offered an exciting and fascinating new model. The vihuela, now number E. 0748 at the Musee de la musique, is rightfully known as the Chambure vihuela after Mme de Chambure, the instrument's former owner.

I was fortunate to have an appointment at the museum when the vihuela was being restored. It lay open, the soundboard removed, on an examination table. I was able to see - admire actually - all the construction features, inside and out. I was struck by a sort of duality of the features. They were both complicated and simple; functional and elegant; rough and polished. This was a remarkable instrument and I was  deeply affected by it. I spent the next two years building models, making presentations and  writing an article about it.

Although I eventually stopped building vihuelas I kept two examples of my work from this time for my own collection. One is my original prototype , very simple, built with common but good quality wood, like the original 16th century instrument. The second is a version inspired by the face plate of Luis de Milano's El Maestro.

Recently I had a serious offer and I decided to part with my El Maestro. The vihuela is 13 years old. I had varnished it originally with a rubbed varnish mixture of spar varnish/linseed oil/solvent. This had protected the wood but the finish had dulled over the years and the instrument  had received some dings. I decided to clean up the surface blemishes and to refinish it with French polish. Working on a vihuela again brought back the same sense of admiration and awe that I had experienced during the earlier time. I got into my filing cabinet and retrieved the 35mm photos that I took of the construction of my first Chambure vihuela. I want to share them with you. 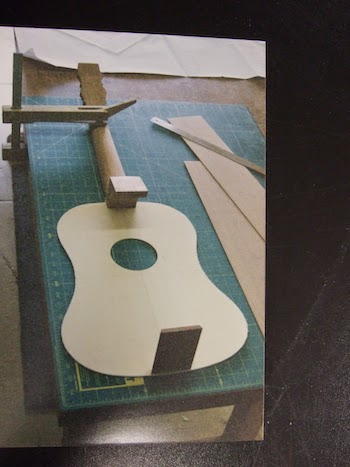 The most striking feature of the instrument was its simplicity. I thought the proper way to express this attribute was by simplifying the construction process. That meant building without a mould and as few mechanical aids as possible.

I made the soundboard thinning it to the same thickness as the original in Paris, cut the sound hole, made the tail block and carved and shaped the one piece neck. These parts were all laid out in a straight line on a cutting mat. The tail block was tack glued in place as was the neck. 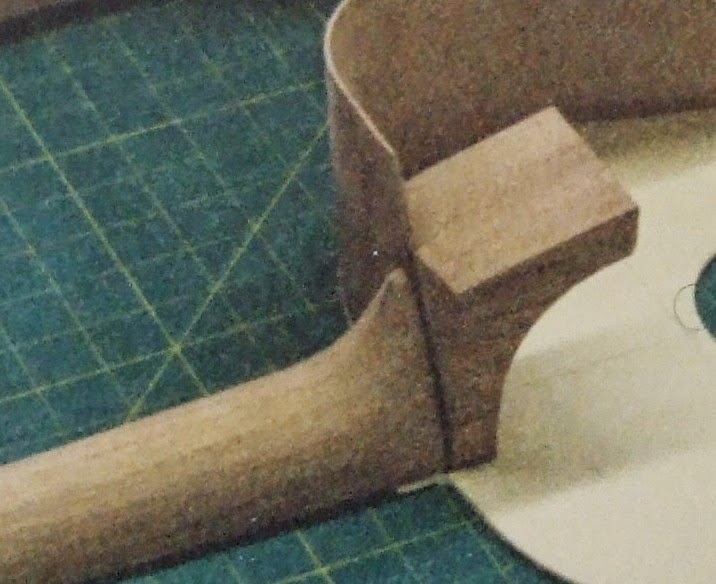 The one-piece neck is essential to building without a mould.  The handle of the neck and the interior block are carved from one piece of wood. The back is  glued to the foot -- its upside down in the photo. The soundboard  rides onto the neck and is glued to its surface . And the side ribs are let into slots cut into the sides of the heel.
The Paris vihuela is the earliest surviving example of what has become known as the Spanish Neck construction. If the procedure is done correctly the tension in the instrument is focussed at this point, relieving stress from the rest of the instrument and allowing every part to function  in unity. All positive tonal characteristics are amplified as a result. 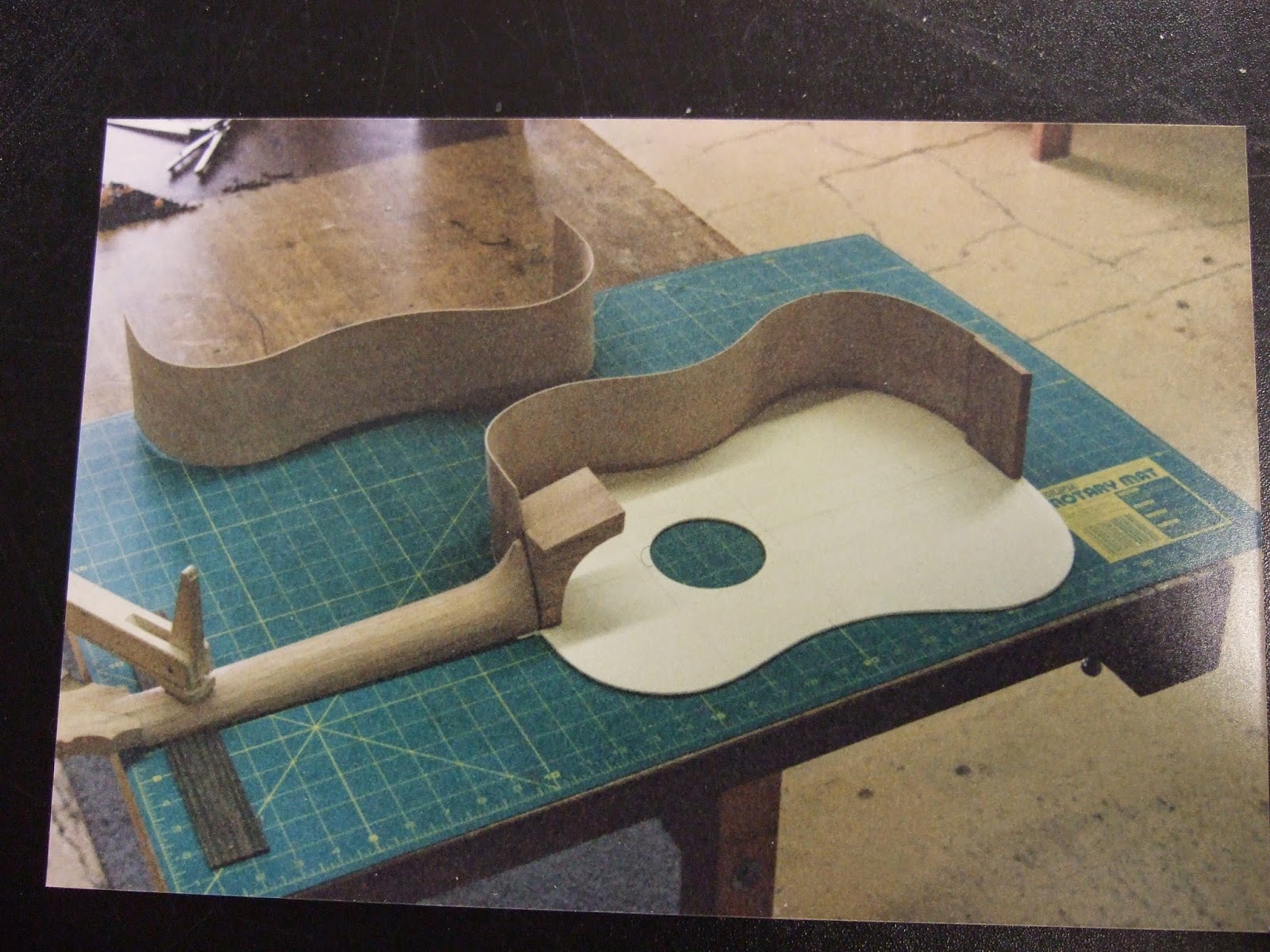 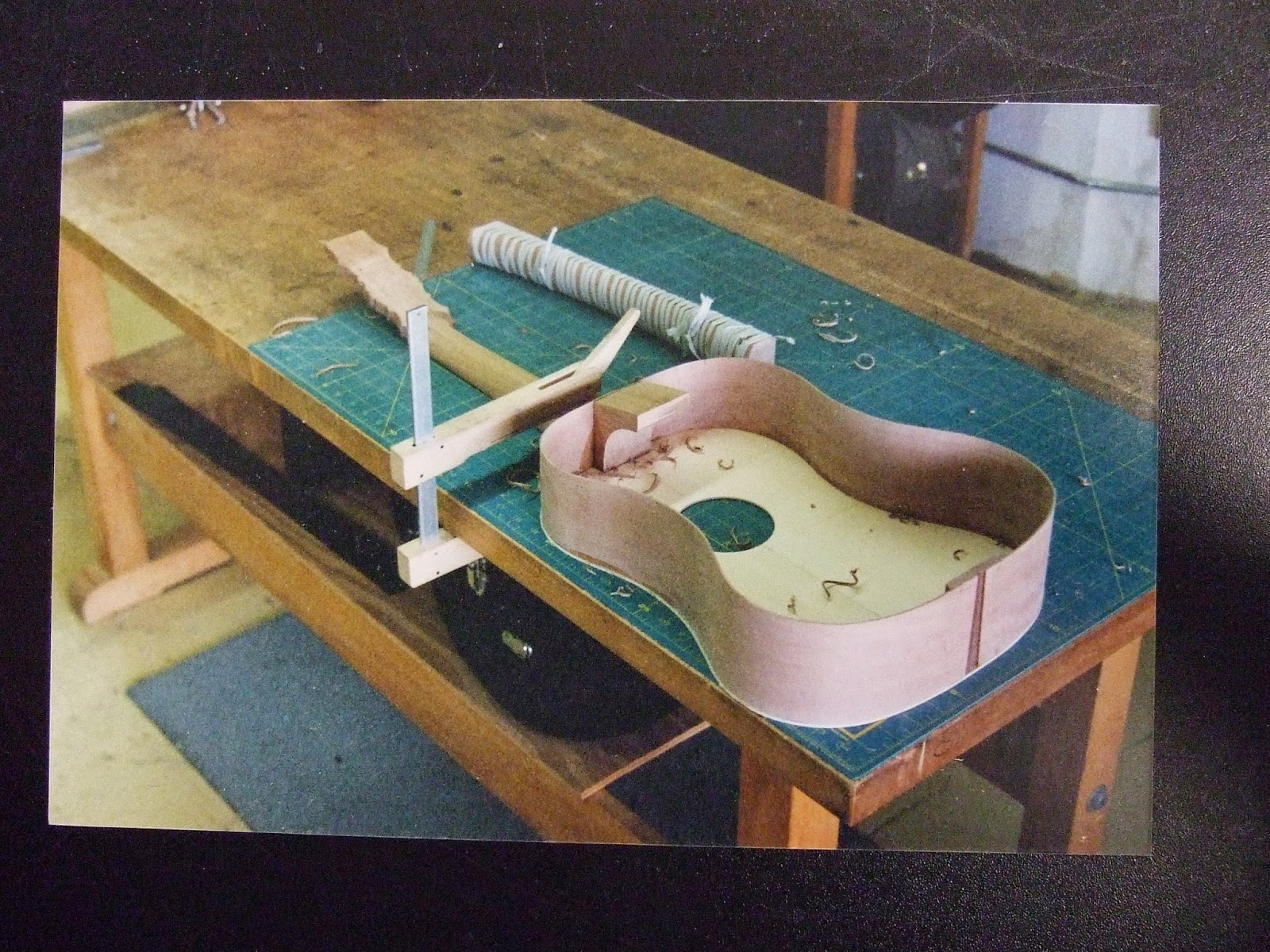 I levelled the side ribs and took a deep breath before starting the daunting task of assembling the deeply fluted back. 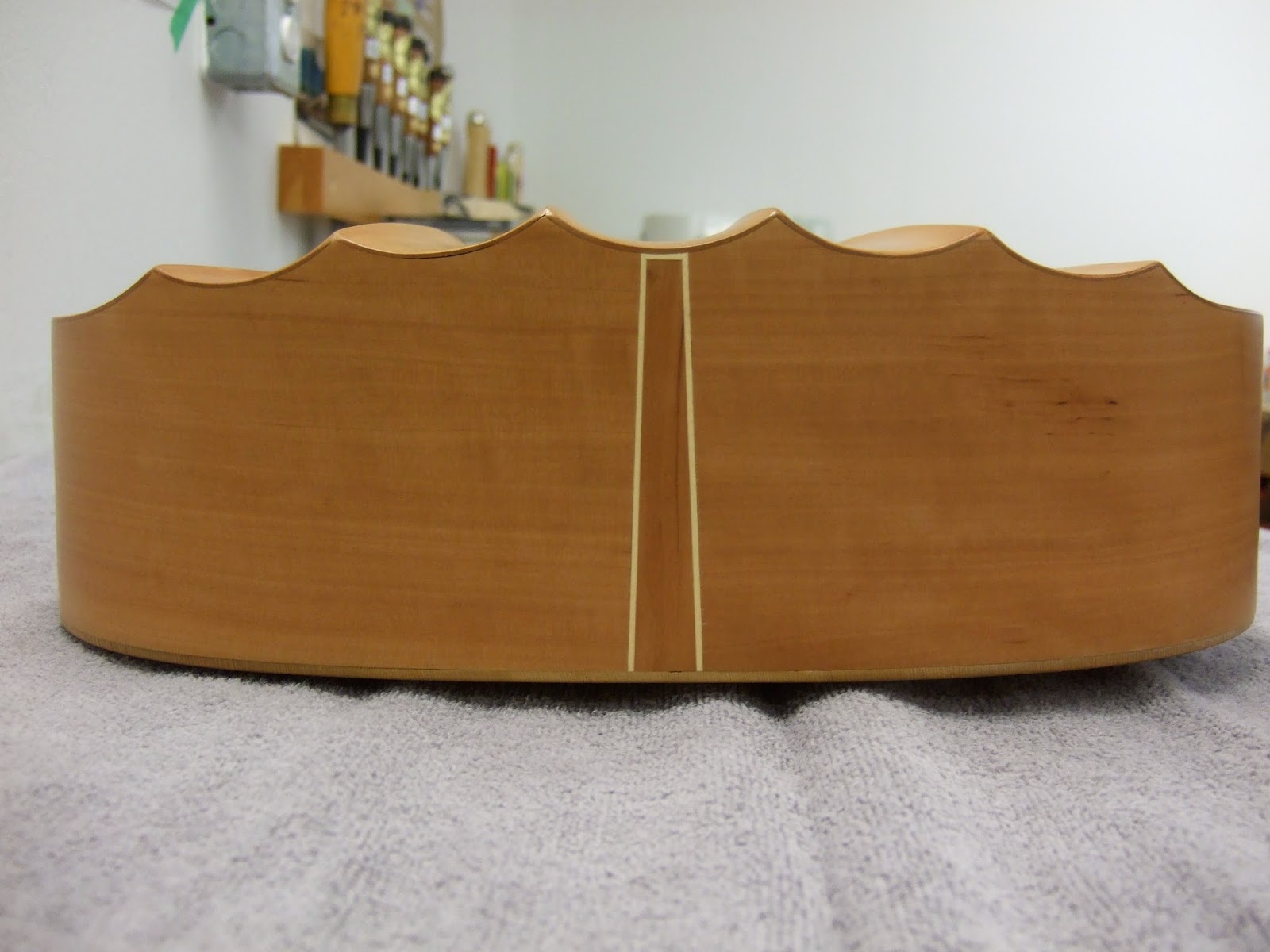 The back is constructed with five identical fluted ribs and two side wings that are mirror images. All of the ribs are arched length-wise as well as fluted.

Shaping the flute is really no different than steam bending a neck veneer for a lute. So using the same principle I made a negative form from ash wood of the vihuela's central rib because that rib is the longest. I chose ash for the form because I knew it would remain stable when subjected to prolonged heating.  I thought pre-heating the form would make it easier to mould the rib material and the residual heat in the form would allow the rib to dry slowly and more uniformly resulting in a more stable flute. I warmed the form in my kitchen oven for two hours at 250 degrees F ensuring that it was heated throughout. Once the form was ready I steamed a prepared back rib over the spout of a tea kittle and wearing heavy deer skin gloves I moulded the rib stock over the form and secured it with elastic banding. It was then set it aside to cool and dry over-night. 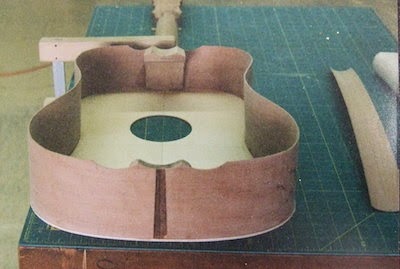 The form was made exactly to the proper width of a finished rib so I could trim the slight over-hang of the prepared stock flush to the form and have a back rib ready to glue in place. I could also use the ash form to help contour the notches in the ribs that support the ends of the fluted ribs. 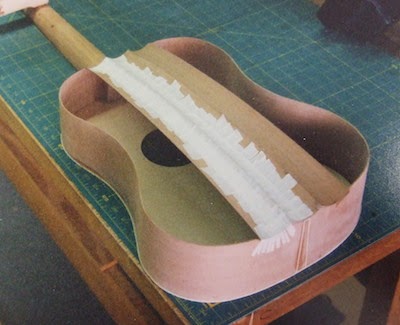 Assembling the back was like building a lute bowl. Starting with the centre rib each succeeding rib was laid up against its neighbor. It was remarkable how easily each rib snuggled precisely into place. 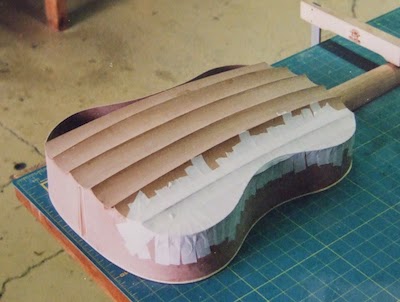 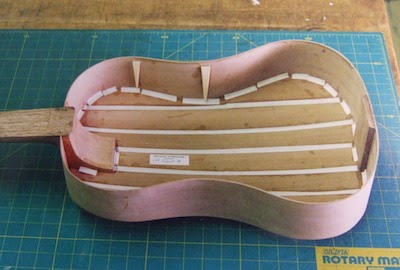 Once the back was assembled I removed the soundboard which came off easily because it was only tack-glued in place. I papered over the glue joints and positioned the 4 pillars that support the ends of the two harmonic bars. Interestingly, this feature became and remains the standard in the construction of Spanish guitars to this day. The pillars are about twice as wide at the point where they contact an harmonic bar as they need to be. This extra width allows some "play" in fitting the soundboard, ensuring that each bar is properly supported.

The body was now complete and I had finished what I had thought would be a difficult process. The work had gone smoothly but the credit for that belongs to the ingenuity of the anonymous vihuela maker who designed and built this intuitive and remarkable instrument.

There is more to be described about my two vihuela models but this post has gotten long enough. I'll cover those items in a future post. 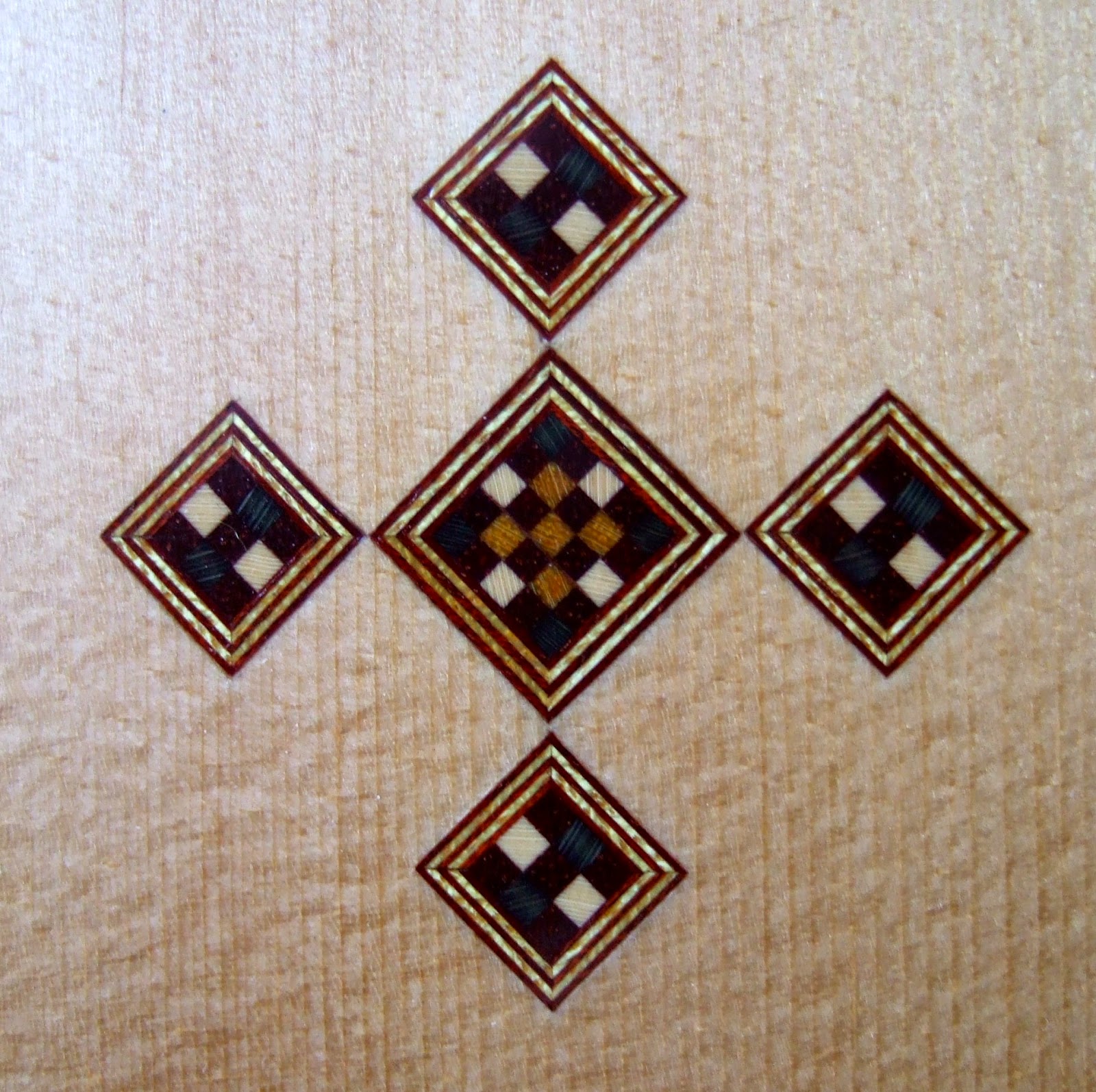