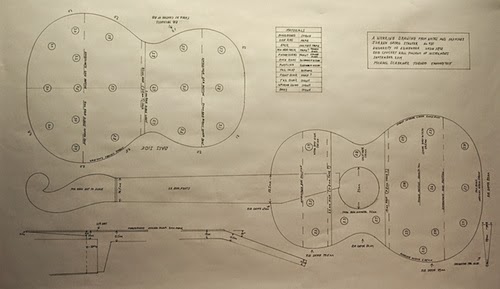 I have made a drawing of the guitar by Johann Georg Stauffer 1829, No. 480, University of Edinburgh, UEDIN 3838 and I am publishing the PDF as a free download. The file size is 224KB and the printed drawing measures 105 cm x 61 cm.  This is a working drawing and includes only the guitar's major construction features. Details of the guitar are presented with photos and explanation in my post of October 5, 2014.

Building a Chitarriglia after Sellas - Part 1 The Design 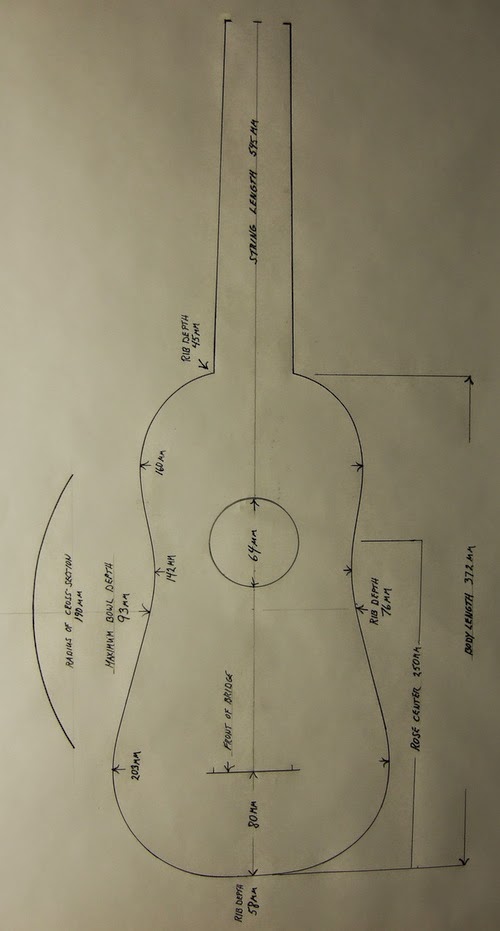 I received a commission for a small baroque guitar some time ago and now I am well along in its construction. The commission was clear in its requirements. The guitar was to have an arched back, a string length of around 54 cm, to be tuned in g' at A 440 with nylon treble strings.

Although there are no surviving historical instruments that meet this description, there is much evidence to suggest that many sizes of guitars were built to satisfy a large demand.
Many collections of music were published for guitar quartets, trios and duos during the 17th century  including directions for tuning  different size instruments. The term chitarra refers to a larger guitar for which there are several surviving examples. Instruments by Stradivari and Matteo Sellas come to mind. The term chitarriglia refers to smaller guitars.   Curiously only two survive, a pair sharing similar features by Giovanni Smit. One of the two is well known from published photos and measures. Its construction is very much in the Italian tradition with multi-piece side ribs and arched back. I drew a plan for an enlarged version of this guitar but on reflection I didn't think  enlarging a design by 50% was acoustically valid.

While figuring out the percentages of an enlarged Smit I got the idea to do the same with several guitars built by members of the Sellas family. Many of their guitars survive and I think it is reasonable to believe that they built small ones too. They just didn't survive. I considered four guitars for which I either had plans or published measurements and photographs: two by Matteo and one each by Giorgio and Giovanni/Michael. I derived percentages of the body length relative to four major measurements: the upper bout, waist, lower bout and rose position. For example, the body length of the Matteo Sellas, EUCHMI No. 279 is 478mm. The waist is 188mm wide. Therefore the waist is 39% of the guitar's body length. I also calculated the widths; upper bout, waist and lower bout relative to each other as a percentage. For an example, the upper bout of the afore-mentioned guitar (206mm) is 81.7% as wide as its lower bout (252mm) and the waist is 91.3% as wide as its upper bout. This second procedure may seem redundant but it brought into focus the  similarities and differences among the four guitars.

I thought these findings were interesting and I regret that I did not have a larger sample. Perhaps someone will do a broader analysis of Sellas guitars because enough of them survive for a more conclusive analysis.

After I finished the calculations I felt that I could produce a  chitarriglia design that a Sellas might have made. But I still needed to determine the length of the body. I did not analyze the relationship between body length and string length of the four guitars because bridges on surviving instruments are often moved or are replacements. So I had to determine the length of the guitar body by trial and error. However, using the proportions of 3 to 2 will provide an useful estimate. The string length is three parts and the body two parts - more or less.  I like to position the bridge at 21 - 22% of the body length and I like the 11th fret to fall on or very close to the neck joint. Given my client's wish for a 54 cm string length I massaged the numbers and came up with a 372mm body length, a 545 mm string length with the bridge positioned 80 mm from the rear and the 11th fret on the neck joint.

Although I now had the dimensions of the guitar's body I needed to draw the contour. I wanted the shoulders of the upper bout to fall a little toward the waist rather than remain high. And I wanted the long section from the waist to the lower bout to draw inward slightly. I drew this free-hand but what I had in mind is similar to:


Three design features remain: the rose position is 67% of the body length and the maximum depth of the body is 93mm or 25% of the body length. The radius of the cross-sectional arch is 190mm. This radius is within the range of what I have observed on historical baroque guitars and it is a degree of curvature that I think works well both acoustically and aesthetically.