The guitars of the Fabricatore family represent a style of construction and appearance that is distinct; different in construction and appearance from those made in France, Spain or Austria in the period 1800 - 1840. I always seem to cross paths with one of them whenever I have a museum appointment and I've collected plans from private owners and museums but I had never examined one in detail.  The Edinburgh University Collection of Historical Musical Instruments has two Fabricatore guitars; Giovanni ( built 1805, No.290) and Gennaro (1822, No. 770). I was intrigued by the early build date of Giovanni's guitar so I chose to pair it with Johann Staufer's No. 3838 (see my post from Oct. 5) for my September visit to the museum. 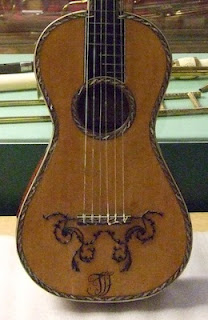 This guitar was built in the era just before luthiers began to increase the width of the upper and lower bouts. It retains the elongated appearance of mid-eighteenth century guitars but with a more indented waist. The flourishes in the lower bout are modest in comparison with other guitars by members of the Fabricatore family. They are sawn from a hard brown wood that was painted black as can be seen in areas where the paint has worn off the rounded edges of the design. They are about 1.5mm high and are glued to the surface of the soundboard. The  monogram (SIF?) is inlaid black mastic. 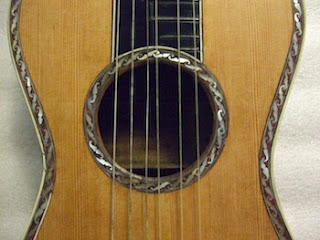 The edge decoration consists of an inter-locking motif  cut from mother of pearl set in a reddish brown mastic, bordered on each side by ivory and ebony lines. The total width is approximately 9mm. The motif is repeated on the bridge block as well as around the sound hole. It continues along the edges of the fingerboard and... 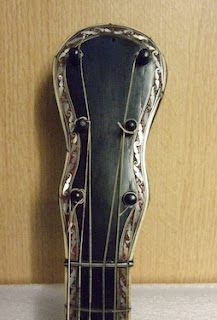 wraps around the peghead. Very stylish!


The fingerboard has a radius that is made visible in the photo by the curvature of the nut and first fret. I think this is unusual because I can not recall another Fabricatore that does, nor could I find another while doing background research for this post. Giovanni adds a nice touch by continuing the curvature on to the peg head.  The same effect is produced from the twelfth fret to the sound hole where the fingerboard has nearly flattened out (previous photos). 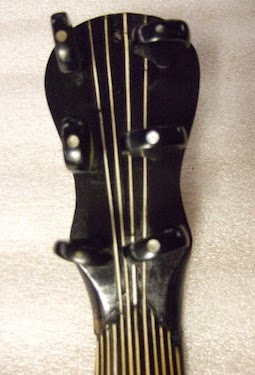 The peghead is veneered front and back with ebony. Ivory lines fan out across the its surface which is a nice touch. The peg head is attached to the neck with a short but full width V-joint that appears asymmetrical. It has been poorly repaired at some earlier date. The ivory lines multiply on the neck and continue onto the heel. 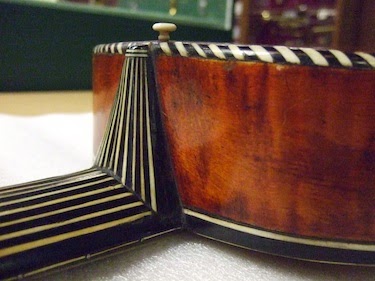 From this perspective it is possible to appreciate the full effect of Giovanni's treatment of the edge banding, neck veneer and curly maple. The side ribs are curly maple with a worn reddish patina. The wide edge banding, seen at the bottom in this photo totals nearly 9mm. Although it is barely visible in this view the top most single band is ivory. It continues on to the edge of the fingerboard. The 'barber pole' banding around the back is particularly striking. There are nearly 400 individual pieces of black material (?) and ivory set diagonally. 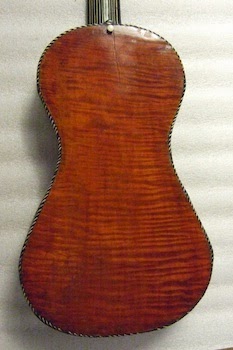 The back is a single piece of maple with a pronounced curl. The back is arched side to side by 4mm across the upper and lower bouts and by 2mm across the waist. The side ribs are tapered so that the depth of the guitar body at the tail is 84mm, at the waist 70mm and 67mm at the neck joint. The finish also appears more homogenous. 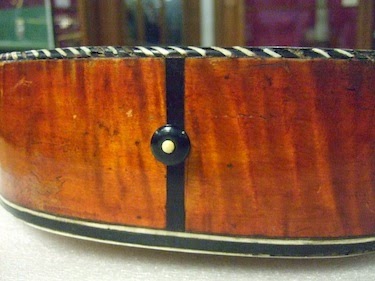 In this photo of the tail of the guitar we can see that the finish was applied in several stages; first an undercoat of yellow topped by a final thin layer of red. The yellow undercoat emphasizes the undulating structure of curly maple and when overlaid with certain reds and browns adds depth to the finish. As long as the color of the top coat is transparent enough the wood grain will show through handsomely. 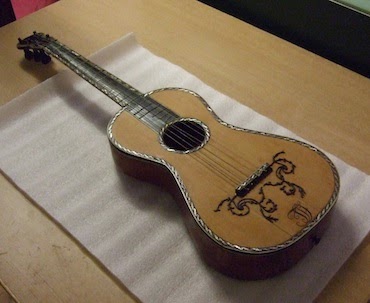 All photographs by the author.

Many thanks to Darryl Martin, Principal Curator, Edinburgh University Collection of Historical Musical Instruments, who graciously arranged my visit.