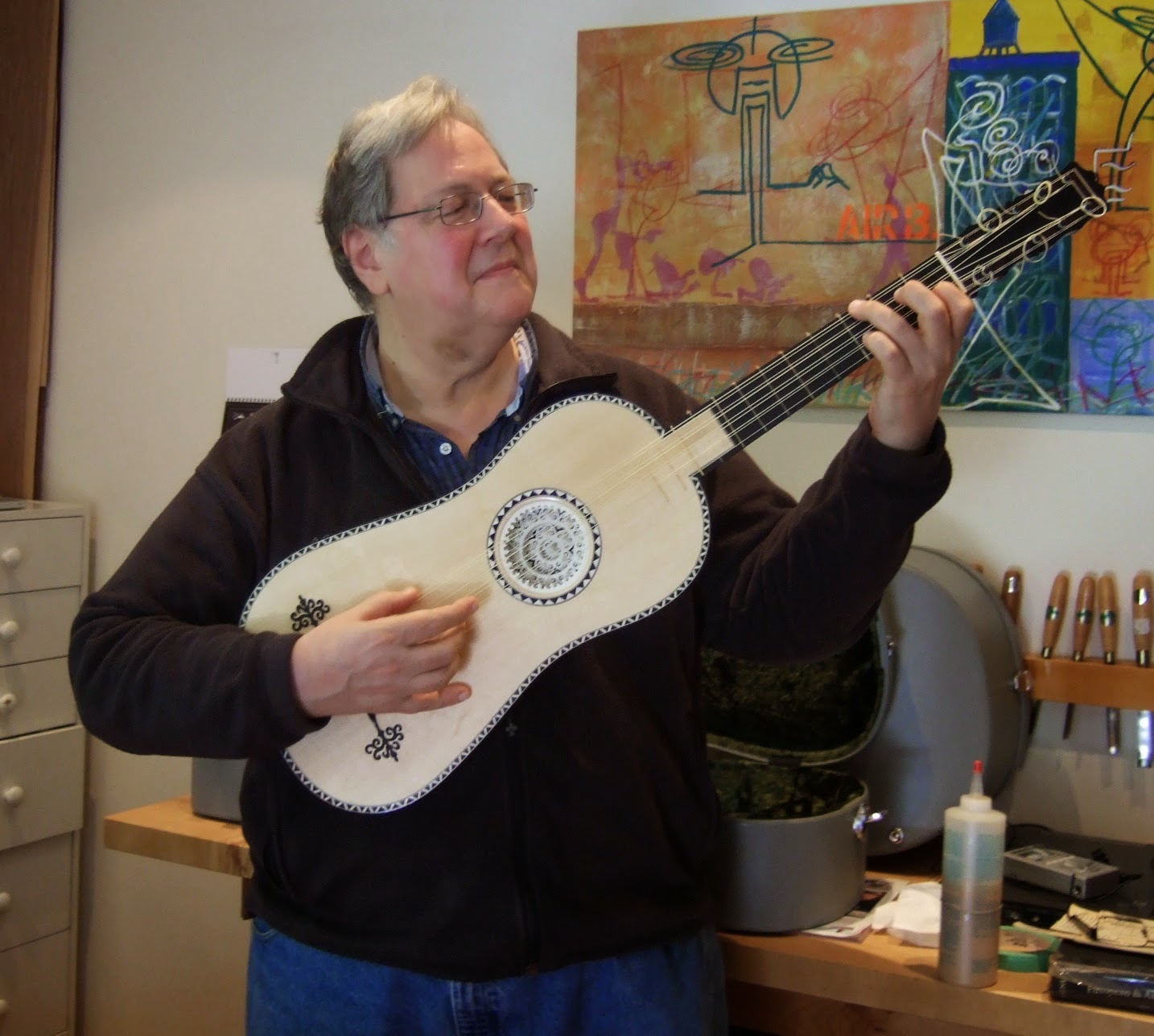 Michael Manderen finally gets to try out my model of the Jacopo Checchucci 1628 guitar (Museum of Fine Arts, Acc. No. 2001.707, Boston USA). As Director of Admissions for Oberlin Conservatory Michael travels extensively auditioning prospective students  but during the summer he relaxes by playing weekends at regional medieval fairs. I have built a number of instruments for Michael and when he asked me to build an Italian baroque guitar he agreed with my plan to research and build a model of an instrument that had not yet been replicated. This was to become a two year adventure. I reported on my visit to the museum in this blog on April 25, 2012. Later in the year, November 6, I posted a down-loadable drawing of the instrument. Six more posts detailed its construction including new techniques (for me) while others chronicled various trials and tribulations that I encountered along the way. This final installment tidies up a few loose ends.

The original guitar was constructed with a short neck. I thought this arrangement was impractical so I increased the string length to 65.5 cm. This allowed for one more fret on the neck. 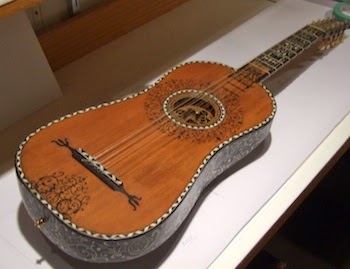 The bridge on the MFA Checchucci is a modern replacement. I didn't find the trident motif convincing, but I did want to retain something of the guitar's aesthetic at this point. 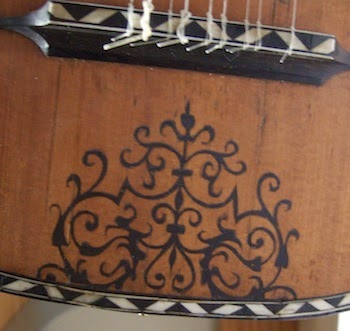 So I borrowed Jacopo's design of the top part of the rear arabesque to serve as the inspiration for the moustache of my bridge. 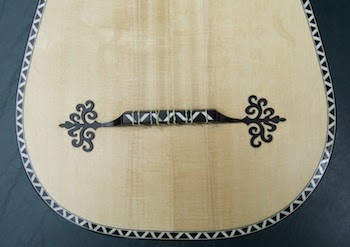 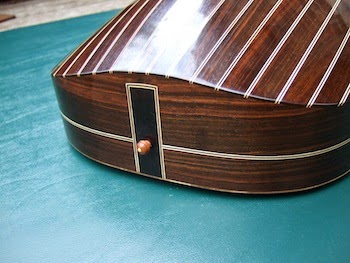 The triple stringing lines frame every element of the guitar's construction. 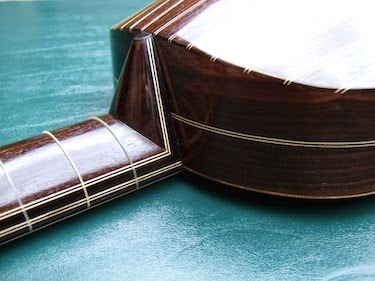 Except for the horizontal lines on the side ribs the triple stringers are part of the aesthetics of the original guitar. 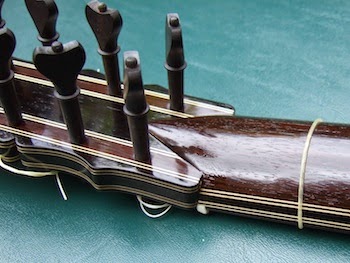 I was fascinated with the design of the peghead and I described its construction in detail in a post on March 11, 2014. 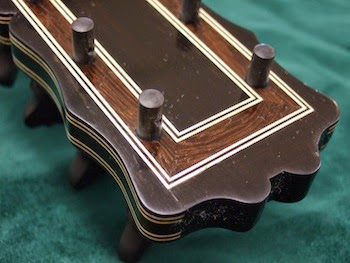 I think the grainy Kingwood figure gives an organic touch to the peghead's geometry. 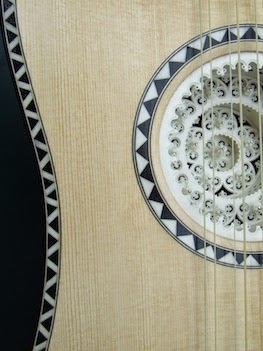 Although I seldom do this type of work, I think my favorite (and most challenging) part of building this guitar was making the borders. I had to figure out the new techniques for cutting, shaping and aligning the individual pieces. There were problems along the way but it all worked out. 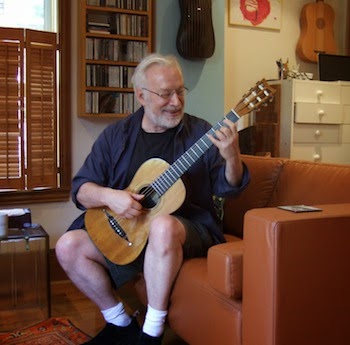 It looks like Jerry Willard is happy with the restoration that I did on his Louis Panormo guitar. I hope so. This is the second time in two years I have done serious work on this guitar. Last year I replaced the fingerboard which resolved the problem of the guitar playing badly out of tune. My blog post from April 5, 2013 describes this work. This time the problem was more serious.

Jerry had just returned from a gig in Greece and opening the guitar case discovered that the bridge had split right along the pin line -- unfortunate, but good timing!

This type of bridge failure is common. Bridge pins are tapered over their length and are intended  to fit snuggly in their holes. The pressure they exert on the surrounding bridge wood is small but over time, combined with the pull of the strings, the wood will often split. There was no question of gluing the bridge back together. It would need to be replaced. 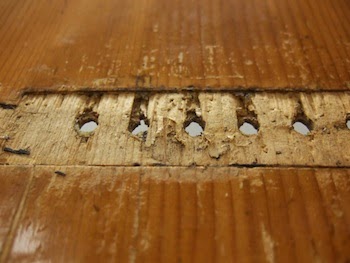 The condition of the soundboard under the bridge was frightening. It was worse than I expected. Obviously it had come off previously and probably more than once. On one occasion large chunks of the top had been ripped out in the area in front of the bridge pins and had not been replaced before the bridge was re-glued. Glue from this operation had collected in the open cavities. Curiously, the ripped out section in front of the 'A' string (second from left) continued pass the front of the bridge. That area had been filled in cosmetically. It is visible as a darker rectangle. Also thin layers of wood were lifted as seen in the center of the photo. But the most troubling sight was that the surface of the raw wood was a good third of a millimeter below the surface of the varnished soundboard. Such a clear line is delineated across the front of the bridge as a result of a technique that some luthiers use to ensure a tidy appearance of the varnish around the bridge. Guitar makers often apply the finish to the top before the bridge is glued on. Afterwards the bridge is held in place and a shape knife line is scribed around the outline of the bridge. The finish in the area can then be easily and precisely removed with a hot knife leaving a clean surface for the bridge. The mistake here was that the hand that held the knife was too clumsy and too deep a cut was made. When the bridge joint failed it took a big chunk of top wood with it. 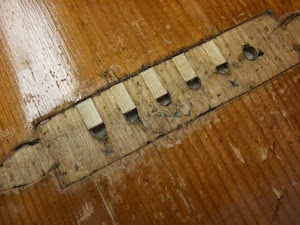 I had recorded measurements of the guitar previously so I knew the area around the bridge was only 2.0mm thick.  I thought that if I just replaced the broken bridge and it came off again, which was likely considering the lack of structural integrity of the soundboard, it would cause even more damage. I started to repair the damage by squaring up the ripped out sections in front of the pin holes and filling the cavities with new wood. Other less damaged areas were re-glued and levelled. 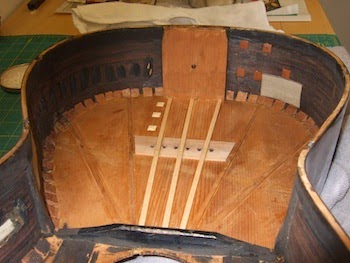 The top had sunk slightly below the side rib level and the bridge canted down on the front edge and up at the rear. This was in spite of the fact that the three center fan bars had been replaced and a bridge plate added in the not to distant past.
I decided to replace all seven fan bars and at the same time to re-dome the soundboard.  To get started I needed to remove the back. 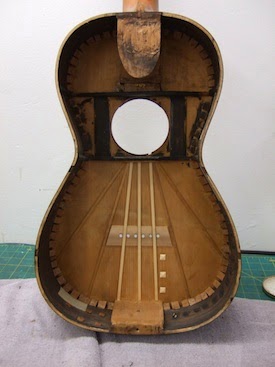 I did this by wicking de-natured alcohol into the joint with the side ribs using a thin palette knife. It came off easily except for the area of the slipper foot that required more patience. 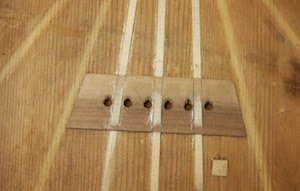 I removed and preserved the original fan bars, not to reattached them but as artifacts. Part way through removing the newer fan bars I discovered the reason they had not prevented the top from collapsing.  As the photo shows the bridge plate was continuous between the 2nd and 5th bar. The central bars were notched to fit over the bridge plate. I realize that this is sometimes a regular procedure for modern classical guitars but their fan bars are considerably larger. As it is, this procedure removed half of the substance and strength of the bars in a critical location. 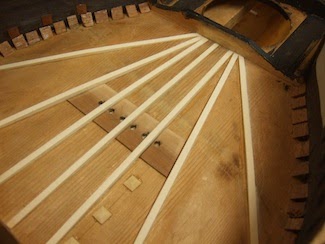 I made new bars from quartered spruce all measuring 5.25mm high and 4.75mm wide. I notched the bridge plate to receive the center three bars with a snug fit and glued them in place upside down on a solera  This is a concave assembly platform and the technique is the traditional Spanish method for gluing the fan bars. The fan bars and soundboard are pressed into the concavity of the solera resulting in a domed or arched soundboard that enhances the tonal characteristics of the instrument. It also makes it more structurally stable, a key attribute. Before gluing the back onto the side ribs I tapered the fan bars from end to end leaving them highest at their midpoint and reduced to zero at each end. The two edge bars originally were only 2.5mm at their highest point with the center three measuring 5mm. I gave mine a little more heft starting at 3.2mm and increasing each pair gradually to 5.25 for the center bar. Once I was satisfied  I glued the back in place.

Now that the soundboard was finished I was back to the original problem -- replacing the bridge. This is a photo of the original  bridge as it appeared last year when I first received the guitar to correct its false intonation. The front peaked edge of the bridge acts as a saddle. At some point it had been altered perhaps because it broke off. Regardless of the reason, two or three millimeters of its height were removed leaving a flat surface. A new rounded piece of ebony was substituted. Part of the work that I did last year involved replacing this piece with a similar piece but one that compensated for the intonation of each string.

This is the bridge that I made to use as a replacement. Its design differs from the original in two important aspects.

First, it has a separate saddle that can be raised, lowered or exchanged. It is important to me and to Jerry that the guitar play perfectly in tune. The top of the saddle is sculpted to provide the necessary compensation for each string. The second feature is the scalloped extension to the rear of the bridge. Panormo did use this feature but I thought the build date for Jerry's guitar predated its use. Since I thought it was important to provide as much gluing surface for the new bridge as possible I included this feature. Also, I shaped the entire bridge including the side wings from the same piece of ebony. Because the surface of the top in this area was irregular I shaped the bottom of the bridge to fit the unique contour of the soundboard and glued it in place, including into the depression that I described earlier.
This completed the job but the story does not end here. Jerry posted a series of photos of his repaired Panormo on Facebook that drew a number of responses among which was a question of concerning  the date of his guitar . Jerry and I believed it to be 1831 and build number 2152. Chris Susans, noting similarities between Jerry's guitar and his duet partner, Wendy Jackson's 1834 Panormo, asked Jerry to post a photo of his label. 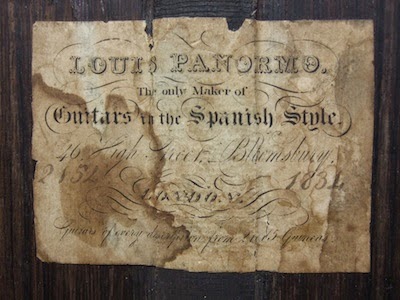 By the way. My blog passed 50,000 page views this past weekend. Thank you all.