I have been unhappy with the frequency that I am able to publish posts. When I started my blog two years ago I was able to publish twice a month on average. My topics were generally uniform: following one instrument through the different stages of construction until I was finished. For me this was satisfying and I know you enjoyed my it because my page views increased month after month.

That changed about a year ago when things became disjointed. It is my fault because I take on too much as I always seek new challenges and I have trouble saying no to clients. Projects pile up and I get myself in trouble. This affects  a lot of things including my blog posts. It is difficult to keep continuity from one post to another.

Occasionally I have published updates but now I am going to try to make them a regular feature. This will be just what the name suggests, news about the progress of my projects but also about daily events  in my work that I think you will be interested in. Today is the first under this new format.

The four photos represent the projects that I'm working on daily or those that are not far from my thoughts. The triple rose belongs to a Koch theorbo, the same model that I built last year for Adlai Stevenson High School in Illinois. I finished cutting the rose before dinner so tomorrow I'll bar the top. The second photo is the Checchucci guitar. I finished the border that is composed of bone parallelograms and black epoxy. I'm sawing out the moustaches for the bridge and then it is on to finishing. The lute is a model of C. 45, the Tieffenbrucker archlute in Vienna. I am building it as an eleven course. It is awaiting its rose and belly. The Panormo guitar in the fourth photo now has its back but it will be a few weeks before much else happens to it. 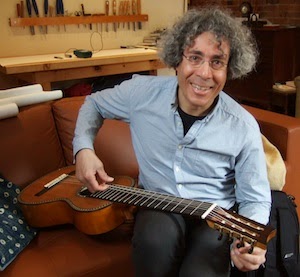 A recent visitor to my shop was Ghareb El Tally, a lutenist/guitarist based in Salzburg. He is in Toronto for a few months and I met him when his archlute needed some work. When he mentioned he had a Roudhloff guitar from the 1840s (Ghareb tells me the guitar is dated 1815, edited April 5 ) converted to an 8 string I asked him to bring it by so I could see it.


Ghareb found the guitar in junk shop in miserable condition. Deciding that it could not be restored he had a Viennese guitar builder do the conversion. The back and soundboard were salvageable, the side ribs were re-contructed and the original neck was saved as a artifact.

This style of conversion is often done to modern six string guitars and the work that Ghareb had done follows the same method. The body was fitted with a classical guitar style neck and fingerboard widened to accommodate eight strings and a slotted peghead with mechanical tuners. A modern bridge completed the conversion. Since the back and belly were original and unaltered I was interested in recording their dimensions. I traced the contour, determined the original harmonic bar locations and with a magnetic probe measured the thickness of the back, top and sides. 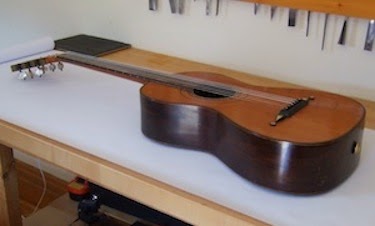 A few days ago I was offered the opportunity to examine and measure an 1828 Panormo guitar that is in original condition. This is terrific because I have the guitar for a few days and I can study it at my leisure. I don't doubt that I'll have more to report on this instrument in the future.