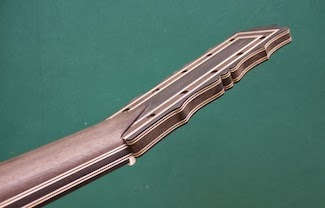 Even without the inlaid ivory arabesque of the original the peghead design is graceful and interesting. It is also fairly complicated to construct accurately.


A central panel in ebony is surrounded by a border of lighter wood  (I used Kingwood) that is edged with two triple lines of holly (ivory on the original)/ebony/holly mitred at the corners. The face and rear share the same design.  This border makes an elegant frame for the ten peg holes that pass through it. But there is very little space for error in aligning the two decorative panels.

The photo below shows the end of the finished peghead.  Note that the laminates that are visible on the edge of the peghead are not continuous across the its width. 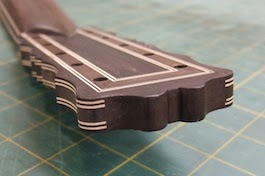 Often fancy pegheads are assembled from thin veneer stacked one on the other. That is not the technique that Checchucci utilized. He constructed the decorative panels of the face and rear on a plain wood core. His trick is that he uses the edges of the core to establish the outer edges of the peg hole border. This ensures that the front and rear line up properly. The exposed end of his core was painted black to match the ebony over-lay. I treated mine differently as I will soon explain. 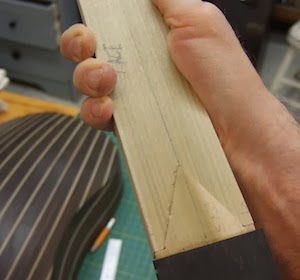 At left, I made a poplar wood core and cut the "V" joint to fit the neck.

In the photo at right I have already assembled the decorative panel on the face and I am continuing on the rear. I glued an ebony plate in the proper location on the rear of the peghead core, but rather than trying to get it in exactly the right location relative to the finished panel on the face, I made it slightly over-size. Then, using the edges of the core against the guide of my miniature table saw I trimmed it exactly to size. The cross cut at the end of the ebony plate was achieved using the table saw guide too. Checchucci could not have accomplished this work as quickly but he obtained the same result probably by laying out the precise lines using a marking gauge and then trimming the ebony plate with a veneer saw rigged with a guide. 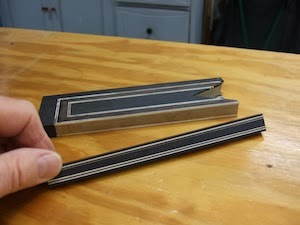 Once the ebony plate is precisely trimmed it is a fairly simple manner to assemble the peg hole border so that it fits exactly to the edge of the core block. While Checchucci painted the end of the core black, I cut my core even with the top edge of the peg hole border rather than extending it and added a solid ebony block to the end instead. That is seen in the photo at left

The last element to be added to the core is the laminated edge piece that will be shaped into the characteristic scalloped edge. The stacked layers are clearly visible in the end view of the peghead shown in a previous photo. 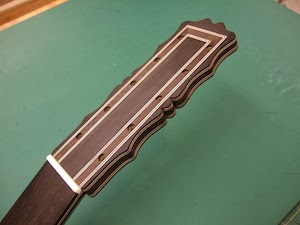 When I examined the original guitar I thought the method of construction using a core made of common wood was an example of a historic luthier going to a lot of effort to save valuable material. Instead it turned out to be a clever method to solve a complicated construction problem. I am always amazed to find examples like this.