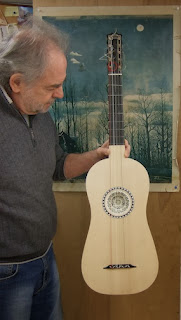 I always string up and play my instruments "in the white" as soon as it is practical to do so. You can see that I haven't inlaid the edge purfling or applied the moustaches to the bridge. With the guitar in this semi-completed state I can still judge the quality and strength of tone and the guitar's playability. If changes need to be made, it is easier to do them unencumbered by varnishes and decorative appurtenances.

I was impatient to hear what my Checchucci sounded like. The harmonic barring of the original is minimal and somewhat unusual. Photos taken during the restoration of the guitar show only three harmonic bars; one between the rose and the neck, a second immediately to the bridge side of the rose and a third about half way between the rose and the bridge. Both of the last two bars are angled off the horizontal by about seven degrees.
The unusual feature is that these bars slope from higher on the treble side to lower on the bass. This is the reverse of what is usually seen on period guitars.  I found this puzzling. To make matters more confusing I wasn't convinced that the positions of the bars were original. A faint trace of a glue line is visible at the waist, below the rose hole, that suggests an angled bar that sloped in the opposite direction - the direction that I would expect. If the third bar, the lower bar, is original there is no indication that it has been moved.

The Museum of Fine Arts, Boston has an audio recording attached to the guitar's webpage http://www.mfa.org/collections/object/guitar-128556   but it was no longer functioning when I last tried it. This is unfortunate because there are few opportunities to hear original instruments. Hopefully, the malfunction is temporary.

I couldn't decide whether to use the barring design as it is appears in the restoration photo or to adapt some features of it or to use another system all together. Players have told me that they distinguish between styles of baroque guitars; in general preferring vaulted back guitars for strumming and flat back ones for plucking. I agree, but I think it is possible to expand on this perception.  In today's period guitar world vaulted back guitars are usually represented by Italian models that were built in the first half of the 17th century. Flat back guitars are often patterned after French examples from the 1670 - 1690  (I know there are popular exceptions and guitars by Stradivari and Koch are examples).  Furthermore, it seems that guitars dating from later in the 17th century were fitted with additional struts such as those from the Voboam family (see my post from March 6, 2012). These features coincide with the era from composer-guitarist Corbette to Visée when a premium was placed on instruments that were ultra-responsive and well-balanced.


But what to make of the Checchucci barring pattern -- what was he trying to accomplish? I think the key to understanding his intent is to be found in the shortened neck. It has only nine frets above the neck joint which is certainly not enough range for a virtuoso who would be unlikely to own such an ornate guitar. There are other clues; the width of the neck at the nut is among the widest measuring 47mm while the width at the joint with the body is only 53mm which doesn't provide much space for the strings to splay out at on the bridge. The bridge is a modern replacement so it is not possible to know the original string spacing, but it must have been narrow. However, the combination of a wide nut and a narrow bridge allow for easy left hand chording and effortless strumming. The barring, being the reverse of the pattern that supports and enhances the treble, in this case, accentuates the bass. These features suggest to me that the guitar was built as a sort of 17th century "rhythm guitar" affording the amateur guitar connoisseur the opportunity to jam with his musicians -- pounding out a ground in the same way the rhythm guitarist did in the Swing Band era.


Although I know of no historical examples of two angled harmonic bars * (see edit) I am familiar with variations on the idea. Two examples come to mind; the Ashmolean Stradivari built in 1688 has a single bar angled toward the treble but placed further away from the rose and many makers, through several centuries, have used a straight bar or angled bar placed just above the bridge. I have used both previously, on guitars from various eras, but never together.

My solution to barring my Checchucci was to acknowledge his contribution by placing two bars in the same positions that he chose but angling them toward the treble instead of the bass. In order to keep the total barring light I again followed Checchucci's example and omitted the second strut that I usually put across the upper bout and installed a single "finger" directly under the first string instead of the flat wood plate (which may not be original) to support the belly frets.

When I strung my model and played it in my limited way, it was fully resonate across its register with strength and clarity in the treble and a measure of silvery lightness throughout. I thought that it should have a different combination of attributes than my Voboam, Koch and Oth models and it does.

Now I am ready to inlay the "ivory" lozenges that make up the border of the soundboard. But while I'm working on that I'll describe assembling the neck and peghead in my next post.

All of December has been very festive and I'm enjoying the holidays and the opportunity to spend the days with family and friends and activities that I seldom have time for.

So, Happy New Year and wishing you all a healthy, happy and prosperous 2014!

*  I was leafing through my copy of the catalogue of Royal College of Music, Museum of Instruments, Part III, European Stringed Instruments, and found an x-ray photo of RCM 22, an unattributed baroque era guitar. The x-ray clearly shows two diagonal harmonic bars tilted toward the treble in much the same location as I chose. Since I examined this guitar in 2006 I must have been aware of the barring pattern but allowed it to drift too deeply into my subconscious.

The catalogue is available from; http://www.cph.rcm.ac.uk/GenPublicationsMuseumCat3.htm 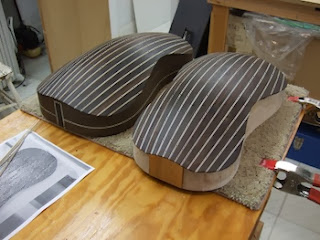 My progress on the Checchucci guitar has been slowed by commitments to other projects and by my decision to  completely re-do the vaulted back and to add inlaid triple fillets to the side ribs. You'll remember in my post from June 18 that I described repairing a collapsed portion of the vault and commenting on the hazard of copying a historical design.

I re-shaped the lower portion of the mould so that the vault was a little more pronounced in the problem area. The rib lines of the last three ribs were almost straight as you can see on the vaulted back on the left. The corresponding ribs on the new back (top right-hand corner of the photo) show a definite curve that strengthens the vault.


While I was building the new back I was also thinking about inlaying a triple fillet into the side ribs. I had considered this before I started building the guitar but I couldn't figure out how to do it. Baroque guitar sides are usually assembled from multiple strips glued edge to edge forming the necessary height and then bent to the proper contour. Had I followed that procedure the result would have been side ribs with odd wavy inlaid lines because the ribs are not perpendicular to the soundboard but are angled in from the down towards the back. 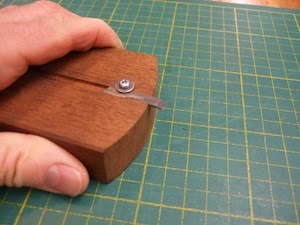 Letting an idea ferment for a while can yield results. I suddenly had the idea of combining the principles of a marking gauge and a veining tool into one and cutting the groove for the inlay right into the finished sides of the guitar. The idea was to scribe two parallel lines, 2 mm apart, into each side of the guitar and then to scrape or gouge out the material between the lines. The procedure would require multiple passes, cutting deeper into the wood with each pass, so firmness of touch and complete stability of the tool and guitar were essential. 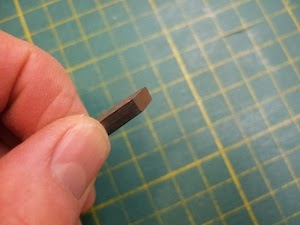 I cut a piece of  2 mm thick tool steel, ground a knife edge  single bevel on one end and a slightly angled but blunt scraping edge on the other end and tempered both ends. The cutting tool was mounted in a simple, but precisely made wooden block. 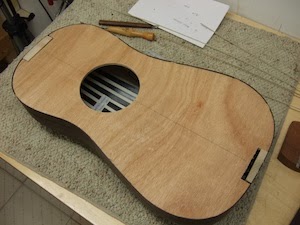 In order to provide stability to the guitar body, I glued a close fitting temporary front into the body and levelled the side ribs on a sanding board. Working on a flat surface, I held the guitar firmly under my fore-arm and pressing the scribing tool block against the flat work board I drew the  tool from one end of the guitar to the other, multiple times. The second parallel line was cut by flipping the blade in the tool holder and repeating the process. 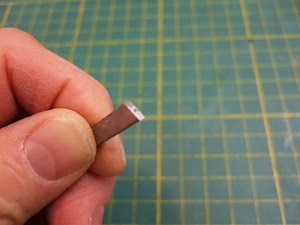 Once I was satisfied with the depth of the parallel lines I fixed the blunt scraping end of the tool in the wood holder. Although I took photos of the cutting and scraping process I can't find them.  They must have vaporized.

The side ribs are only 1.2 mm thick so I was worried that the pressure of the scraping tool would cause the rib to bow and subsequently throw the tool out of line, ruining the groove. 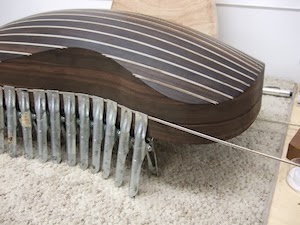 But all went well, although I did scrape through the side ribs in several places, and after test fitting I was able to glue the first fillet in place. In the areas where I installed the fillets I papered the inside of the ribs when all was finished. 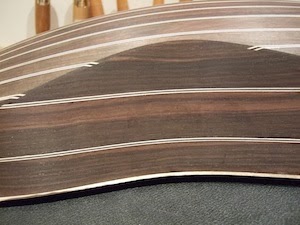 I liked the results and so much and since I was confident in the method I decided to add a second fillet. I made an extender block of the necessary height and screwed it to the bottom of my tool holder. Installing the second fillet went as smoothly as the first.

I am well along in assembling the neck and peghead with their unique veneer design. As soon as I have glued the neck to the body I'll report on my work again. In the meantime here are several photos of the Checchucci guitar to date. 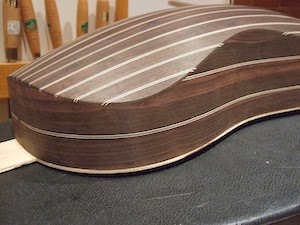 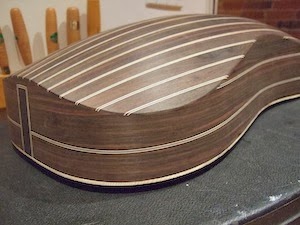