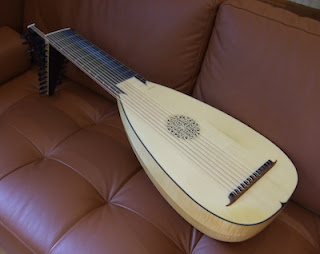 I recently finished a model of the 'Warwick' Hans Frei lute. The original is conserved in the Market Hall Museum, Warwick UK. Although it has been one of my favorite models I didn't blog about building it because it, or rather I, literally fell victim to fate when I broke my knee (requiring surgery) just after I finished assembling the bowl. This happened before I started blogging. Unable to complete the lute, I fitted a false top to the bowl so it would retain its shape and placed it on a shelf in my studio to await a better day. But I wanted to blog about the lute and decided to focus on the original. So this post is shaped in part by my thoughts, but also by responses to queries that I made to fellow lute makers and lutenists.


I recently found out that at much at the same time as I was finishing my model, Adam Busiakiewicz, a curator  and lutenist at the museum were the Hans Frei is conserved, announced the idea to organize a lecture/mini recital about the Warwick Frei. https://twitter.com/Adam_TakeMeOut . Although Adam was to play on his own Frei copy, the museum agreed to display their original Hans Frei which had not been seen in public for many years. This took place on September 10 and I am sorry not to have known about it earlier. I did confirm with the museum that the Frei will be on display until October 19. http://heritage.warwickshire.gov.uk/museum-service/ .

The Warwick Frei has long been a popular model for contemporary lute makers as a visit to any maker's website will attest. The history of its conversion from a renaissance to a baroque lute is frequently noted. But little has been written about it and few photos appear in the public domain. Adam posted this photo 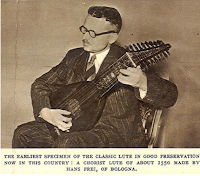 My favorite article and the one I re-visited for this post is: Michael Prynne, Galpin Society Journal, vol. 2, 1949 that described the Frei with measurements and four excellent photos. Online, this article can be downloaded from JSTOR, http://www.jstor.org/stable/841395

When I started building lutes no plans were available for the Frei, so I scaled up one of the photos from Prynne's article. For many builders this was the only available option. When plans were published in 1979 I bought those, but they are now in tatters. I just ordered a new set from The Lute Society: http://www.lutesociety.org/pages/catalogue#ma

The Warwick Frei was in playable condition in the 1950s  and presumably it still is. Prynne wonderfully describes the tone; "The tone of the lute is sweet, though quite small, with a rather reedy quality in the lower register. The notes hold out for a long time, and the richness in overtones and comparative weakness of the fundamental note produce to a marked degree the very intimate and sympathetic tone which is the lute's essential character."

Prynne's remarks are revealing because they relate to a curious feature in the graduation of the thickness of the Frei soundboard. It tapers in thickness from the area behind the bridge where it is unusually thick to the area around the neck joint where the thickness is more normal. In my opinion this thickness is responsible for the richness, intimate and sympathetic tone but not for the smallness of tone. The treatment of the harmonic barring, size, shape and placement  regulate the strength of tone. That is what I found in building models of the Warwick Frei and I think it is also true for other historical instruments that have unusually thick soundboards.

I discovered that Jacob Heringman owned a Warwick Frei six course built by Michael Lowe with the original soundboard graduation. When I contacted Jacob he generously provided a lengthy account of his experience with the lute that includes a link to several tracks of his  Josquin des Prez CD where he uses his Frei. Jacob relates that Michael Lowe built the Frei six course with the graduated soundboard as an experiment and asked him to try it out before applying the finish with the intention of thinning the soundboard if he did not think that it worked. Jacob said:" My strong feeling was that he should definitely finish the instrument off leaving the soundboard as it was, without making any further changes. It felt pretty good right from the start, but I had the strong hunch that, because of the amount of wood in it, the instrument would take a long time to develop ... When the instrument was still brand new, I recorded several of the tracks on my CD of Josquin intabulations on it. It sounds striking and remarkable already on that recording http://heringman.com/Josquindepres.htm  Now, fourteen years on, it sounds even better, and it has certainly become more responsive and more nuanced as time has gone on... in my own collection, it's my favourite -- my 'desert island lute' and I'm so pleased that we kept our nerve and went through with the 'experiment'."

Building copies of historical instruments requires some detective work. Writing about them requires witnesses. I would like to thank David van Edwards, Bruce Brook and Tony Johnson : whose remarks I did not use but who pointed me in the right direction. 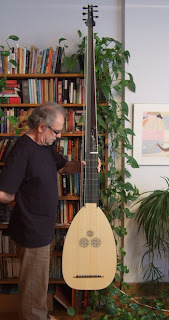 I finished my first model of the Christoph Koch theorbo, Venezia 1650, Number 3581, Musikinstrumenten Museum -- Staatliches Institut für Musikforschung, Berlin. Earlier this year I travelled to Berlin, examined the instrument and reported on my study in this Blog on April 19, 2013. I spent the summer analyzing the templates that I made of the bowl and turning them into a workable mould. I was surprised by the lack of symmetry and I mentioned this in my earlier post but I wasn't ready for the problems this would cause in constructing a mould. Since I had wanted to replicate the shape of the lute's bowl accurately I was willing to put up with mis-alignments of individual ribs and I intended to include these features. 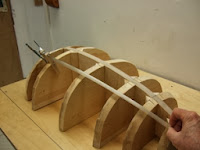 However, when I assembled the cross-sections and proceeded to check the rib contours with a flexible ruler, I could see that the irregularities would be a major problem. (My procedure for laying out rib lines is described in detail for another mould in two posts on May 8 and 17, 2012). On the original lute bowl the rib widths at any cross-section were approximately the same, but to maintain this uniformity, the edge contours were distorted.

I pondered this difficulty for some time considering whether it was possible to remove the irregularities from the rib lines while maintaining the uniformity in width without altering the shape of the bowl. I decided that it wasn't. My solution was to start over.

Most of the irregularities are found on the bass side of the bowl. The treble side is  accurately assembled. I decided to make the bass side a mirror image of the treble side. If the lute bowl had been symmetrical in the first place this would have been the case. I assembled a new mould using the treble side contours. I felt this would result in a bowl that, while not a replica of the original, was representative of it.

I constructed the bowl with East Indian rosewood ribs that I cut from the remains of a log that I have had since 1983. The triple spacers between the ribs are made of holly/ebony/holly.

The low profile of the bowl is obvious in this view. I was pleased that the contour lines of the ribs of my model are a close match with the original.


The Koch bowl is constructed with kingwood ribs

with triple spacers of ivory/kingwood/ivory. 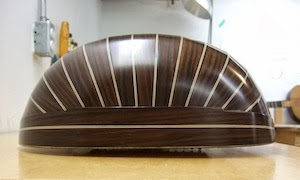 This photo of my Koch shows the flow of the ribs over the rear of the bowl. When I examine an original lute I carefully measure and plot the position of each rib as it disappears under the end clasp. This is an important aid in reproducing this difficult area of the bowl shape. 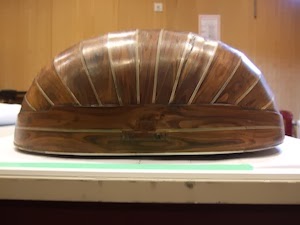 I chose not to use as deep an end clasp as on the original. This doesn't alter the flow of the rib lines. Note that the angle between the fourth and fifth ribs (the first and last ribs are not visible) on each side is significantly tighter than the others. The angle on the bass side of the original is tighter than that on the treble. This feature is, in part, the reason that I had such difficulty in constructing the mould.

Note too, that the center rib is narrower than the others. These factors lead me to believe that the original bowl was not assembled on a mould but assembled from templates and not starting from the center and working outward, one rib after another, as is the method today but from each edge inward. 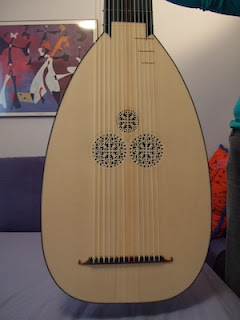 When I constructed a symmetrical mould by altering the bass side it affected the line of the ribs, not the contour of the face which was retained. By comparing the two photos you can see the slight different in the curving line through the middle third of the face and that in the lower quarter of the face from one side to the other.

I used 10 year old Italian spruce for the top, thinning it to just under 2 millimeters on the treble side, a little thinner on the bass and down to 1.1 millimeter around the rose area. I do not know the barring arrangement in the Koch theorbo so I assumed it was similar to that found in his archlute, E.546 Musée de la musique, Paris which is a standard design and similar to what I described in my post on the Kaiser theorbo from November 7, 2011.  Plans for the Koch archlute are available from the museum. 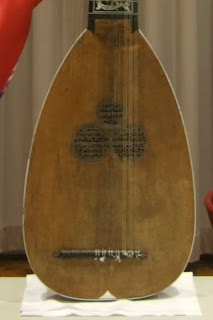 The distance that the bridge and rose are placed from the rear of the face affect the instrument's tone. I think it is important to respect the original location of these elements. Theorbo bridges are often off-set to the bass side as a result of balancing the alignment of the extension. I routinely set my theorbo bridges off center by 5 mm or so. The Koch bridge is off-set much more than this.  Although I chose to not to duplicate this feature, I did roughly follow the design and dimensions of the bridge. 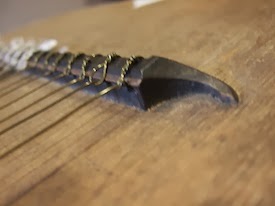 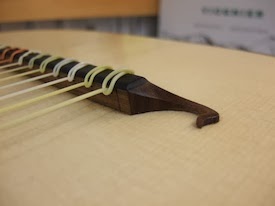 Notice that the top front edge of the Koch bridge is smoothly canted back. I believe this was done to accommodate the metal diapasons that risked breaking if bent over a rounded but more abrupt edge. I liberally rounded the front edge of my bridge.

The rose is beautifully cut but the detail is somewhat obscured 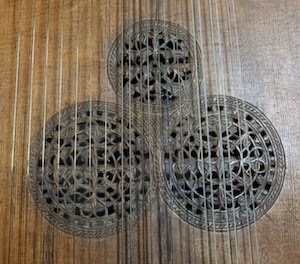 by an accumulation of wax. I cut a different but similar design using the same location on the face and the same diameters as the original. 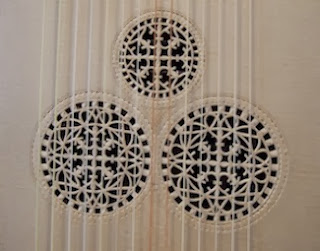 The neck and extension of the original theorbo are veneered with kingwood and elaborately inlaid with ivory arabesques. I used ebony and rosewood thinly cut to veneer the neck and extension. The latter I edged with holly/ebony/holly banding front and back. 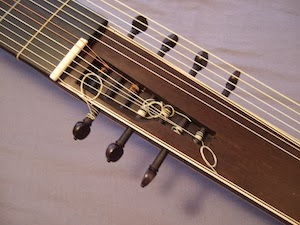 The fretted string length of my Koch model is 84.6 centimeters with diapasons at 167.5 centimeters in a disposition of 7+7.