The Checchucci Guitar Rose -- An Inlaid Ring of "Ivory" Triangles 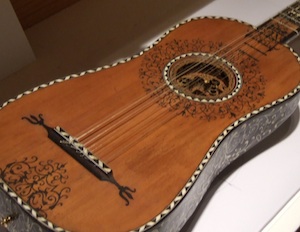 It was never been my intention to build an elaborate copy of the Checchucci guitar, but I did want to include those features that characterize its design. In my model I have preserved the inward sloping side ribs and the seventeen piece vaulted back of the original, but I laid aside the idea of producing the inlaid arabesques. For the soundboard I decided to replicate the ring of ivory triangles around the tiered rose. This presented several challenges both in the choice of materials and technique. The original design is created with ivory set in a black paste. Nowadays ivory is a prohibited material in many countries and substitutes are available so there is no justification for using it. 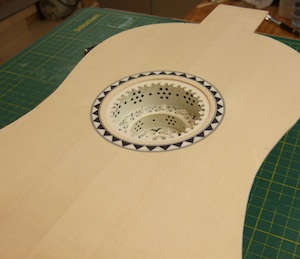 I used bleached cow bone purchased from a guitar supply company and sold as over-size blank saddle bone. For the black paste I used carbon black mixed with slow setting epoxy. This mixture flows into crevices, levels itself, dries to a low sheen and shrinks very little. It does have the potential to stain surrounding material that might be porous. I took precautions against this. 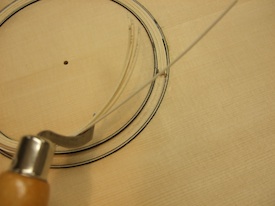 To begin, I routed a recess in the soundboard a little more than 1mm deep and with hide glue, glued two 1.5mm wide black/white/black strips of purfling to each side of the recess. I filled the recess between the two strips with lengths of plastic purfling material. This kept the black/white/black strips snuggly against the walls of the recess while the glue set but was removable because plastic doesn't stick well to hide glue. 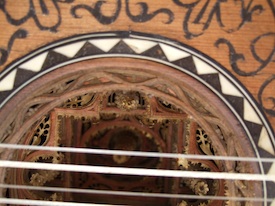 There are thirty-two white triangles embedded in the ring. A close look reveals that they are not uniformly shaped. Some larger and others smaller, some are clearly right angles and some not. Certainly these were cut by hand and fitted individually. I intended to follow a like procedure but I wanted to be a little more accurate. 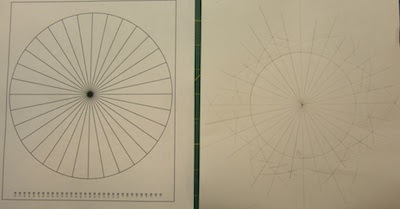 The first thing I did was to devise a way to lay out the spacing for the thirty-two triangles. The right hand figure is a circle divided into thirty-two  equal segments. I drew this with a rule and compass by dividing the circle into quarters and each quarter in half and so on until I had thirty-two segments. They were not quite equal. Sue had a better solution using Excel to make an accurately segmented pie chart. 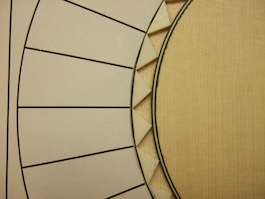 I cut out the center of the diagram and taped it top the soundboard. This provided a clear guide to position each triangle. The recess for the triangles is 5mm wide so I prepared several strips of bone saddle material 1.2mm thick and 5mm wide. The triangles are not right triangles so there was no easy way to set up a cutting jig to insure accuracy. 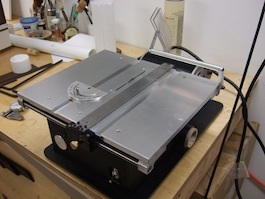 Earlier in the year I bought a minature -- the table measures 10x12 inches -- precision table saw to make custom purfling strips. The machine is designed for model wooden boat builders and works perfectly for fine inlay pieces for lutes and guitars. I experimented with various angles on the cross cut guide until I found the one that resulted in the proper fit. 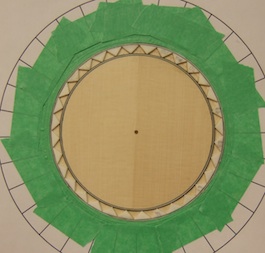 After that, the assembly of the ring went fairly quickly. The triangles fit snuggly but I glued them in place with a tiny drop of hide glue. I mentioned previously that the black paste I wanted to use to fill the recess around the triangles had the potential to stain both the soundboard and the bone. I masked the exposed soundboard and brushed a thin solution of lacquer over the top and edges of each bone triangle in order to seal them. 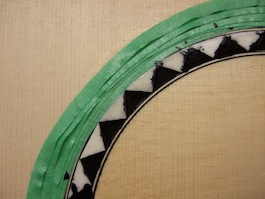 Then I mixed a paste of carbon black and slow setting epoxy and dabbled it around the triangles, pushing the paste into the corners with a tooth pick. I was careful to insure that the level of the paste was at least equal to the top of the triangles. Once the paste  dried I levelled the assembly with files. 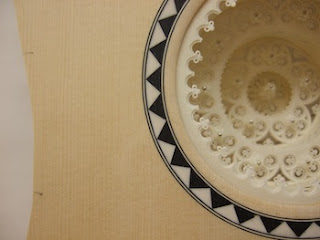 The finished ring turned out quite nice. Tiny air bubbles formed in the corners of several of the triangles -- something I half expected. Before I finish the guitar I will dab some black paste into the offending holes and re-level them.

Next, I will construct the neck and peghead, assembling the guitar and stringing it for a trial before I apply the inlaid bone and black paste edging to the soundboard.

The tiered parchment rose is by Elena Dal Cortivo.