This past week I visited the Musikinstrumenten Museum of Berlin's Staatliches Institut für Musikforschung to study, photograph and measure the theorbo by Christoph Koch, Venezia 1650, No.3581.

This is an important example of a medium size, mid-century theorbo. Its construction combines features typical of early 17th century Italian theorbos with elements usually associated with later instruments. Also, the fingerboard, neck and extension are stunningly and masterfully inlaid with ivory arabesques, whorls and engraved figures. 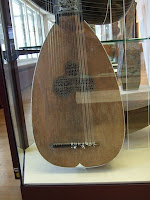 I have been interested in building a model of this lute for some time. It is slightly smaller but with a flatter bowl than the Kaiser theorbo (Musee de la musique, E.24) that has proved so popular for me.  However little information about it, other than the essentials, is available. See Klaus Martius' lute database:

Therefore, a trip to Berlin was essential.

I recorded details of the belly, neck and theorbo extension with measurements and photos which I will describe later in this post, but my principal interest was in the design in the construction of the bowl. This is the feature that tonally distinguishes one model of theorbo from another. 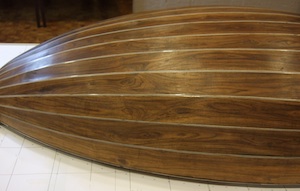 The bowl is built with fifteen ribs of kingwood (dalbergia cearensis) separated by 2mm wide spacers composed of narrow bands of ivory/kingwood/ivory. The rib wood is "flat-sawn" rather than quartered in order to display the its intense figure.

Using the same technique, as I did with the Unverdorben lute in Dean Castle, Scotland (post from October 2,2012) I traced the face contour of the bowl on a paper grid and made templates of the central axis and five cross-sections. 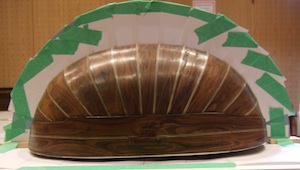 The bowl is noticeably flattened as is the norm for larger Italian theorbos. It is constructed with wider ribs while its compatriots, the multi-rib bowls, are assembled from many more narrower ribs -- a technique that actually simplifies construction because narrow ribs can be bent side-ways to conform to the odd rib shape that results from flattening the bowl.


I noted the size of the end clasp and the width of the ribs as they disappeared under it. 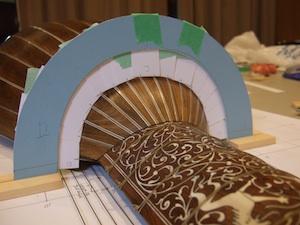 Also, I measured the width of the ribs at the neck joint and the angle of the joint itself. So by combining the measurements from both ends of the bowl with the  positions of the ribs derived from plotting the cross-sections, I will be able to assemble an accurate mould of the bowl. 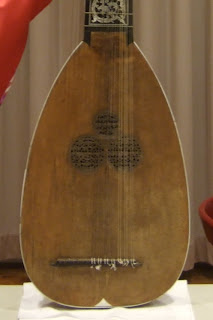 The soundboard is 375mm wide and 594mm from the end to the neck joint and is constructed from very fine grain spruce. The contour is pleasing; full in the lower third and sloping gracefully toward the neck. The triple rose whose size, top to bottom, equals one quarter of the length is placed in the third quarter of the total length. The border is a combination of thin ivory and kingwood (in places repaired with ebony) bands with a wider strip of ivory on the outer edge. However, there are two disruptive elements. The contour in the  lower third of the face is asymmetrical; the treble side contour forms a sharper curve than the bass side. And the bridge is off-center. This in itself is not unusual, but the placement is extreme. The total string width on the bridge is 161mm. The first treble string is placed 60mm from the center line of the bowl, leaving the last bass string significantly close to the edge. 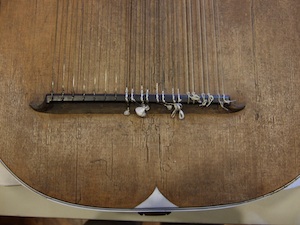 Whether this was by design or error is difficult to decide. The fretted neck has been shortened which would have resulted in repositioning the extension. Perhaps it was repositioned at the wrong angle, necessitating moving the bridge. However I could discern no marks on the soundboard to support this hypothesis. Presumably, Koch chose this placement expecting a particular tonal reward. 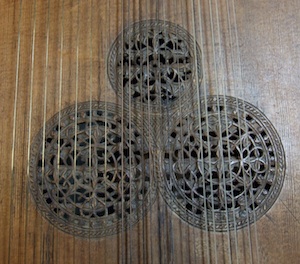 Contrary to the appearance of the quality of work in the photo of the triple rose it is well done. A patina, which appears to be an accumulation of wax has collected between elements of the design and in the incised areas obscuring the detail. 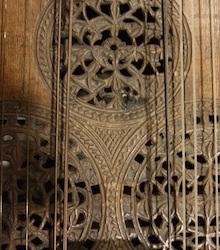 One of the features of this lute that separates it from its earlier predecessors is the noticeably cambered fingerboard. I couldn't remove the strings in order to measure the camber accurately nor could I take an adequate photo due to the glare produced by the strings, but I estimated the camber to be nearly 4mm at the nut, diminishing to nearly 3mm at the joint to the neck. To put this in perspective however, the neck is 108mm wide at the joint to the bowl and 91mm wide at the nut, 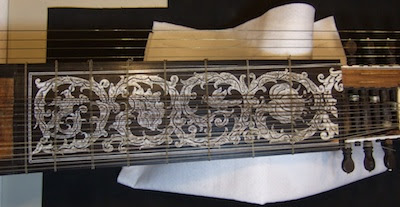 The ebony fingerboard with the inlay is thin (around 1mm) stretched over a cambered spruce (?) core. You can see that the whorl has been truncated at the nut leading to the speculation that the neck had been shortened. 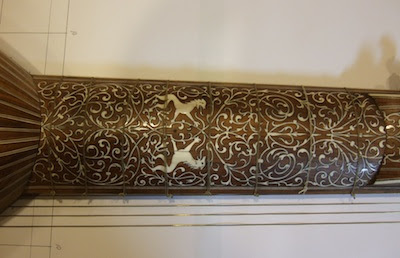 The arabesques on the back of both the neck and theorbo extension are superb. This is the most beautiful inlay work I have seen. Usually I find such things too elaborate, but the lines are delicate and graceful. The veneer for the back of the neck and the extension, front and back as well as the lute bowl is a light colored kingwood. The tiny gap that remains between the ivory and the wood veneer is filled with a darker colored mastic glue that accents the over-all design. I think the combination of these factors adds to a perception of lightness of design. As a point of interest, Joël Dugot, Musée de la musique, notes that this design is the reverse (dark wood inlaid into an ivory panel) of the one that Koch created for his archlute built in 1654 and conserved in Paris, E. 546. 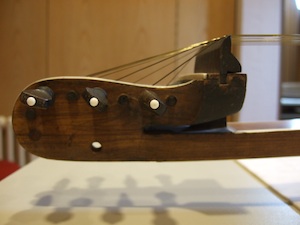 The theorbo head is constructed in the recognizable style that folds back on itself. The front is decorated with an attractive checkerboard. The unusual feature is that it contains nine holes. But that is not all. 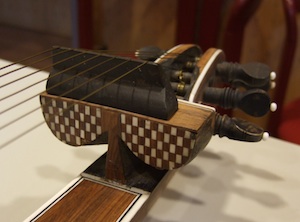 There is also a cluster of plugged peg holes at the end of the peg cavity. The vertical black lines are not shadows but an inlaid design. The tops of these pieces are visible in the previously shown photo of the fingerboard inlay. 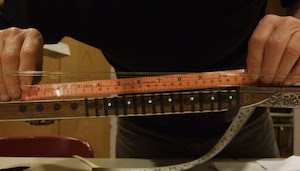 An additional plugged hole is located mid-way along the length of the extension level with the inlaid emblem. 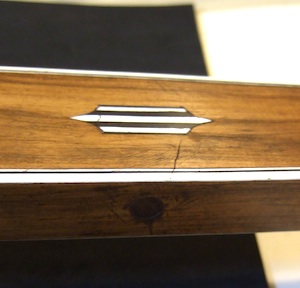 The top surface of the extension shows a restored area contiguous with the cluster of holes shown previously. 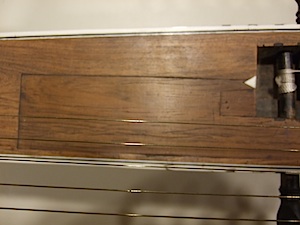 Obviously, this area had been used to expand the compass of the shorter neck.  Whether this represents a legitimate or an invented use could be investigated further.

I have only touched the many interesting features found in this instrument. But my trip to Berlin and this report is only the beginning of a lengthy project to document and to build replicas of this important theorbo. I plan to report my future progress in this blog.

I would like to thank Heide von Rüden for her assistance during my study and Dr. Annette Otterstedt for arranging my visit and graciously agreeing to extend it for an extra day when I found that I needed more time to complete it.


All photographs by the author.