A lute with a triple nut extension offers the baroque musician several advantages. Firstly, the tonal difference between the stopped strings and the longest open basses is less pronounced because the length of the strings is increased by a smaller increment with the addition of the intermediate nut. There is also the practical aspect that string diameters may be duplicated from one echelon of strings to the next.

The triple nut extension that Andreas Jauch made for this lute (Copenhagen, No. 104A) is designed in such a way that the length of the strings, stopped by the second and third nuts, are in whole number ratios relative to each other and to the fretted length.The original string lengths  are: 105, 93 and 78 cm. Thus, 105/93 is 9:8 which is a major second and 105/78 is 4:3 which is a perfect fourth. These ratios are important for preserving harmonic relationships across the lute's compass. I wanted to retain them in my lute.

I hadn't build this particular lute and extension before
so I needed to design and make a template. I used a previous
model as a guide. Since the proportions between nuts were different you can see that I shank the length of the first and second pegboxes. Since I was adding a fourteenth course I lengthened the third pegbox. Also, I wanted a more delicate look. The top template is 24mm thick at the first peg position. I reduced that to 20mm and diminished the remainder of the design accordingly. Because of the nature of the forces with off-set strings it is very difficult to anticipate how much the structure will bow up, twist side-ways, or otherwise move unpredictably, so there is always a concern for strength. 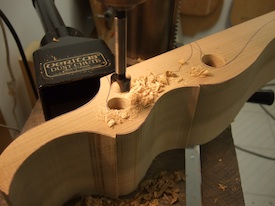 I decided I could accommodate this risk, first by altering
some features of the design and second by using a freer approach to executing the design rather than following a template. I squared a block of poplar, laid out the template, band sawed the bottom surface. Here I am proceeding to finish the cuts on the top surface by using a drill press to fashion the tight contours in the design. 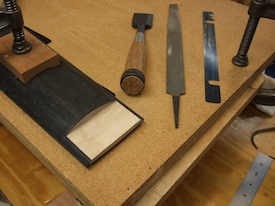 At this point I put the extension aside and cut the recess in the lute neck where the extension will sit finishing it with chisel and files. The third object on the bench is a strip of thin metal that I use as a guard to protect the adjacent wood surface when I'm working into a corner with the file.

Once I'm finished with the joint I can check the alignment by clamping the extension to the neck. The intermediate nut carries the 9th - 11th courses and the third nut carries the 12th - 14th. I mark these string positions on the top of the nut arms. This procedure determines the way the two pegboxes are off-set to the bass side. Now I can layout the side contours. 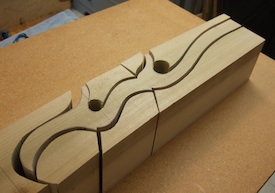 I saved the waste portions of the original block of poplar and glued the whole assembly together with pieces of thin cardboard sandwiched in between the parts. Referring to photos of historical triple nut extensions I drew the side contours on the top of the re-assembled block allowing for some adjustment in  the final shaping. Then I band-sawed the design. I didn't have a photo of this stage but the following photo and description explains the same process. 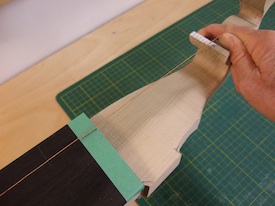 Here I have tack glued the extension in place and am carefully checking the alignment again. The position of the 9th course as it crosses the nut is marked on the piece of painter's tape so I can run a string from the 9th course on the bridge over the position mark and check the alignment on the second nut. The part of the nut support to the treble side of the string is waste and will be cut off. The treatment of that is one of the design elements that has to be worked out. As I mentioned earlier, I had decided not to work from a predetermined plan but to allow the design to evolve. 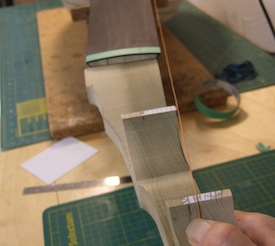 This photo, while showing the alignment of the 11th course as it clears the intermediate nut, also shows the initial shape of the treble side of the extension. I have yet to cut the final contours. 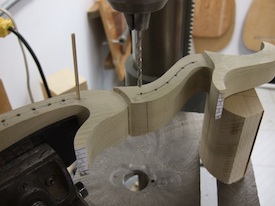 The first thing to notice in this photo is the way I off-set the intermediate and third pegboxes. The bass side of the first pegbox is straight. The second is off-set with an edge that defines a "S" curve with the nut support. The second pegbox snakes toward the bass and terminates with the "S" curve of the  third pegbox.

To drill the peg holes I set the extension in a machinist's vise and supported the free end. The holes in the first pegbox are drilled perpendicular to the center line of the neck. 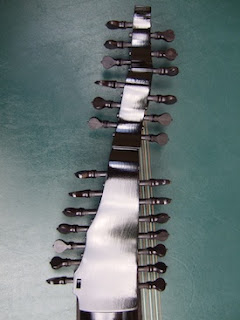 The second pegbox leans toward the bass and the third pegbox slants back toward the treble, creating a subtle crook. The holes in the third pegbox are drilled close to the perpendicular of its center line and the holes in the intermediate pegbox nearly follow the crook.
I drill from both sides of the extension with the intention that the holes will line-up. That is problematic, so I use a small drill bit. This allows some adjustment when enlarging the hole to peg size later on. I took great care and fortunately all of the holes lined up. 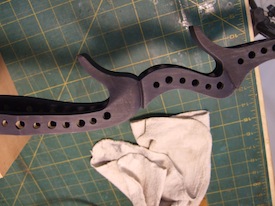 I made several attempts to fashion an agreeable contour on the treble side. The weak spot on the triple nut extension is at the end of the first pegbox where it narrows significantly and the torque from the intermediate and third nuts exert their force. When I initially band-sawed the side contours I left extra wood planning that I would need to experiment with the design. What I settled on is seen here. The end of the first pegbox is rounded smoothly with the side of the nut support tapering away gently. The pegbox ends in a slight crease, but then broadens out a little to begin the intermediate pegbox. This arrangement leaves a fair amount of wood and thereby avoids a design weakness. The intermediate pegbox thins only a little in width and depth and rounds quickly onto the flat surface of the third pegbox. 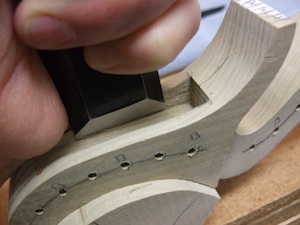 Next time I'll excavate the peg recesses, finish the area around the joint with the neck and glue it on.

The Soundboard Barring for the Jauch Baroque Lute 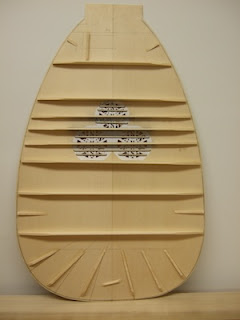 In my last post I cambered the neck and glued on the 2mm thick ebony fingerboard. Now it was time move on to barring and fitting the soundboard. This is one of my favorite and most satisfying lute making activities. I spend a lot of time comparing barring patterns used by historical makers, reviewing what I have done before on similar lutes and thinking about the approach I want to take.

Ivo Magherini, who provided me with the drawing and photos for this lute, was also able to get a glimpse of the interior.


Even though the original lute is intact there are several large cracks through which "it was possible to assess part of the barring layout," Ivo reported.
The first bar is 32mm in front of the bridge (measurements are taken from the middle of each bar). The second bar is 76mm from the first. The third bar is 59mm from the second. The fourth bar is 50mm from the third. This bar is the center of the rose.  There is one bar that runs from the curved edge of the belly to under the treble tip of the bridge. There was no trace of a J bar (bass bar) It was not possible to determine what the arrangement of bars was like in the area above the rose. For reference, the front of the bridge is 101mm from the rear of the belly.

I think of the three bars between the bridge and the rose  as primary bars. Their placement and size control the strength and evenness of the tone. At 32 mm from the bridge the position of the first bar provides strength. The location of the second bar, unevenly spaced closer to the third than the first deserves comment. Friedemann Hellwig in his important article, On the Construction of the Lute Belly, Galpin Society Journal XXI, 1968, describes the division of the lute belly by 16th and 17th century lute makers into equal parts with the bridge and bars placed proportionally. I followed this method when I first started building but I had problems with overly assertive notes or weak ones. Eventually I attributed this to equal spacing and when I moved the second bar the tone evened out. Jauch placed his second bar more unequally than I would but I decided to follow his example - after all, these guys knew what they were doing.  The barring I used to support the triple rose area is not the only solution but one that is found in many lutes. Since my client for this lute plays with light tension strings I decided to use only two bars between top of the rose and the front block rather than three. Also, I always make this area of the soundboard thicker than elsewhere, around 2.0 - 2.1 mm. So I didn't think it needed extra support. 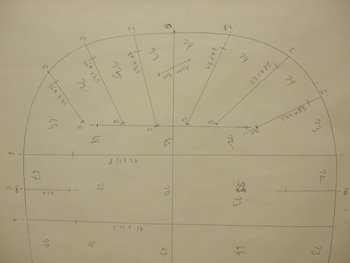 The barring pattern in the area around the bridge that I used is typical of Jauch's era. The size and exact placement of the individual bars is based on my experience. I alter dimensions and placement to fit the requirements of individual clients. I drew the diagram from the finished belly. I have made one for each of my lutes dating back to the mid 80s. The belly thickness is listed in 1/1000 inches. So "74", for example, is 74/1000 or about 1.9 mm. I'll continue with a short explanation  to help you decipher the diagram. The first finger bar on the treble side (right) measures 7.5mm high at  the hash mark and tapers in both directions to 0.0 under the tip of the bridge and 2.0mm where it glues to the rear of the bowl. It is 3.9mm wide. The first harmonic bar is 4.2mm wide and 15.8 high. The hash mark near the end denotes the beginning of the scallop. The bar as it glues to the rib is 6 mm high. 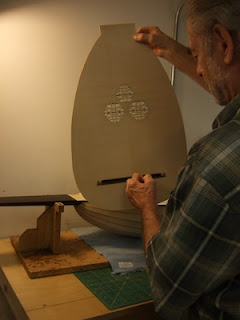 Throughout the process of shaping the bars - rounding the tops and cutting the scallops - I listen to tap tones. Not necessarily the pitch but the clarity and strength. It changes as the bars are shaped, changes again when the bridge is glued on and then again when the belly is glued to the bowl. I make adjustments to maintain the strength and clarity. I always string up my lutes before varnishing to see what  how it turned out. More than once I've opened a lute and moved a bar or added a "sweetener". 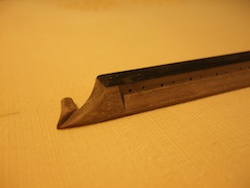 To finish this post here is a photo of the bridge. Because there is a fourteenth course the bridge is a little wider. To compensate,  I shortened the bridge tip.

Before gluing the belly on the bowl I was careful to make sure the bar ends fit snuggly against the edge ribs and by stretching a piece of sewing thread from the bridge to the nut I assured myself that the neck was in proper alignment.