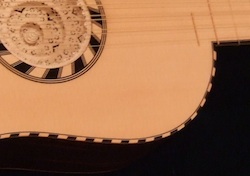 The last post in this series was February 8. The lozenge--shaped elements that form the rosette and border the soundboard are a distinctive feature of Voboam guitars. I can't image building a Voboam model without including this design feature. It is not as difficult as it looks. In this post I will describe a simple mechanical system for laying--out the design of the rosette border and an equally simple method for cutting and assembling the elements. 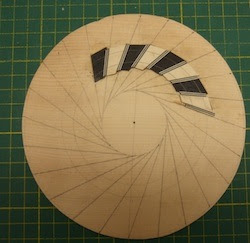 I lay -- out the design with a compass and ruler on a scrap piece of soundboard spruce. Since the spruce will serve as a backing for the rosette it is a logical material to use. First, I scribe a circle with a circumference greater than the finished design. Then I divide the circle into 24 equal segments that represent twelve white and twelve black lozenges by using a protractor to mark segments of 15 degrees each. A greater or smaller number of segments could be chosen.  I scribe a smaller circle that will determine the angle of the sides of the lozenge. The larger this circle is the more angled the lozenge will appear. The smaller circle is not marked off into segments.  I draw a line with a ruler from each point on the large circle to a tangent on the smaller circle. The last element of the design is to scribe the two circles that represent the finished rosette.

The individual elements are cut from strips of ebony and holly that I thickness to about 1.5mm. The spacers are prepared with black-white purfling material. When I first made this rosette I constructed a miniature mitre--box to duplicate the two angles. However, the angles in the mitre box were slightly wrong. This didn't manner in assembling the first few pieces but the error multiplied and became significant. Finally I was making so many adjustments to the cut pieces and to the mitre-box that I scraped it and started cutting the lozenges "free-hand". In this method the first cut is always the same angle and can be marked with a gauge. The angle of the second cut is determined by the next segment line. Even if this cut proves to be slightly inaccurate the lozenge can still be used because the correction can be made on the next lozenge. This design is so "busy" visually that slight imperfections are unnoticeable. Note also that the material that I cut the lozenges from is wide enough that there is an excess of material on each side of the finished design. This is intentional. If I happen to make a lozenge too small or too large I can still achieve a proper fit by moving it in or out from the center. I glue each piece in place with hot hide glue holding it in position with a push pin and spring clamp. I am in no hurry when I assemble one of these so every so often during my work day I will make and glue a lozenge. This method suits my work habits. It depends on the spontaneous accuracy of hand and eye rather than mechanical repetition. 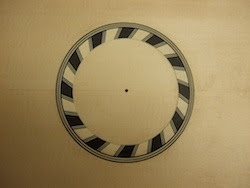 Once all of the pieces are in place I clean up the surface
of the design and carefully and accurately cut it free
from the excess scrap using a small router. The spruce
backing protects the rosette and keeps it intact during
this operation. I then rout a cavity in the soundboard for the rosette to sit in.  Members of the Voboam family used a variety of designs around the outer edge of the rosette including thin black and white purfling material that I favor. I then thin out the spruce backing and glue the rosette in its recess.


There is a very useful article by Florence Gétreau on the various construction elements found in the guitars of the Voboam family including a list of barring patterns. In my next post on this guitar I will lay-out the pattern and explain several options that I have used previously.

Yesterday I visited the Musée de la musique  in Paris to examine two Lacôte 10 string guitars -- decacordes, as they are known, numbers E. 1040 and E. 986.5.1. I have been interested in the pre-classical guitar since my earliest years of building instruments but the era has occupied only a niche for me. Lately, thing have changed. I have lute clients who are interested in the music for accompanying singers and /or for exploring the virtuosic repertoire. It is not just a question of having the appropriate instrument, but of understanding what the period was all about, sound-wise. Many makers built multi-string guitars and I am intrigued by their work. Obviously, the addition of extra strings create imbalances, structural and tonal. These two guitars represent several solutions.

The guitar, in the foreground, is anonymous but built in the style of Lacôte. It is as meticulously built and with excellent materials. Museum curator, Joël Dugot, suggested that Lacôte may have allowed his employees to build guitars for personal sale. Perhaps this is an example of one. The guitar in the background is a Lacôte. This guitar presents a very elegant solution to the problem of weight that such a wide neck produces. The guitar also displays a lever mechanism for the changing the pitch of the diapasons. The treatment of both of these issues in the construction of the anonymous guitar is more utilitarian. You can see photos and descriptions of these guitars on the museum's website at: http://mediatheque.cite-musique.fr/masc/ .  I will report my finding to you at a future date.

As always, Joël Dugot's assistance during my visit was generous and informative. Thank you.

Lute makers always seem to be curious about "new" models -- neglected instruments in museums' storage or ones that surface from private collections arouse an understandable degree of interest. Not that long after I started building lutes an article appeared in the LSA Journal that described lutes in a Barcelona  museum; John Griffiths, “The Lutes in the Museo Municipal de Música in Barcelona”. Journal of the Lute Society of America12(1979): 48-66.  One of them, a seven course, built in the  sixteenth century by Marx Unverdorben was reported to be in original condition. From that time on I have been fascinated with Unverdorben and his work. He and his lutes are  enigmatic. I had difficulty in tracking him down. Little is known of his life -- there may have been two Unverdorbens -- and his lutes represent styles that include early renaissance nine rib models and later multi-rib types. My interest in the Barcelona Unverdorben was hampered by the fact that  the museum has had three homes since Griffiths' article appeared. Things started to come together last year when a web search turned up his website:
http://www.vihuelagriffiths.com/JohnGriffiths/Home.html
I got in touch and an exchange of emails dissolved time, distance and language barriers. I was able to arrange an appointment to examine not only the original Unverdorben seven course but also an Unverdorben theorbo (?) fragment. My appointment was yesterday! 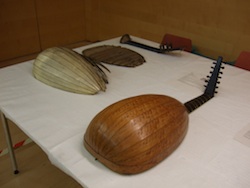 Here is what I found. In the foreground is the seven course. The string length is 67cm and the bowl is 33cm wide to give you an idea of its size. The thirteen ribs are bird's-eye maple. The second lute, in three parts, appears to be a small theorbo, but only a stump of the original neck survives so it is difficult to be sure. Also, the label dates the lute to 1581! The ivory bowl is badly damaged on the treble side, the neck block and neck stump are detached from the bowl, but the belly is nearly intact and the barring appears unaltered. The treatment of the bars is very interesting. I am looking forward to studying my drawings and notes and sharing my findings with you.

I am grateful to Oriol Rossinyol, Co-director of the Museu de la Música and his staff for the warm welcome and generous support they showed me during my visit. I especially want to thank John Griffiths for helping to make this possible.

Click on the "Online catalogue" on this page to search the museum's collection:
http://www.bcn.cat/museumusica/en/LesColeccions.html

In one of my early posts ( Sept 10) I mentioned that I usually work on two instruments at once in order to be economical with my time. I had been working on a French guitar after Jean Voboam but I had reached the stage where I needed the tiered parchment rose that I had belatedly ordered from Gianluca Ceccarini. 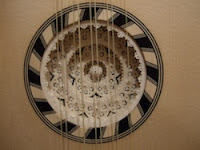 The second instrument was the Kaiser theorbo that became the  focus of this blog at the end of last year. As I commented once, it is more difficult to blog about instrument making than it is build the instruments. And it certainly takes longer to get the posts finished.The theorbo was finished in October and the guitar in December. I wanted to keep my blog current, but it doesn't seem possible. So now, six weeks after finishing the guitar, I'll pick up the story where I began taking photos for my blog, part way through the guitar's construction. 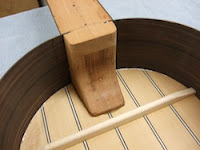 By early September I had assembled the neck, side ribs and back for the body. The photo at right shows the "slipper foot" construction -- the neck, heel and interior block are assembled forming a single unit. At this stage it is convenient to have the neck nearly finished, that is, completely contoured and veneered, and it is, except that I don't have a photo to show you.


The ebony side ribs are let into slots cut in the side of the slipper.  The mass of the slipper is reduced to a minimum. I cut the slots for the ribs as tight as possible and chastise myself when I have to tighten the joint by adding shims. 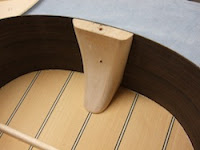 The rear block is shaped in such a way as to reduce the gluing surface of each of the three elements that are attached to it -- belly, back and ribs. The narrow foot of the rear block mirrors the slipper on the neck. Internal features of baroque guitars are difficult to ascertain. I consulted two sources for the design of the  slipper and the rear foot. 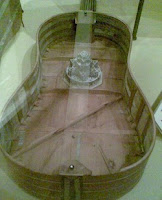 This photo, taken by Viola d'Amore player
Thomas Georgi, of a Voboam guitar conserved in the
Smithsonian National Museum of American History,
Washington, D.C. shows both the slender profile
of the slipper and the triangular foot; evidence of a
desire not only to reduce mass but also to firmly anchor the back. 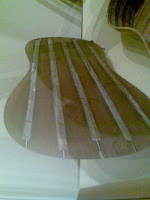 As you can see in the next photo, also taken by Thomas, the back was constructed without supporting bars. The thickness of the wood was considered sufficient to maintain stability. 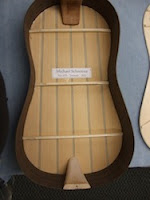 I am not convinced. I added three struts to my back even though it is nearly 3mm thick. I feel that an unsupported back is tempting fate --  risking stability problems when the guitar is thousands of miles away in the hands of a disgruntled owner.

On the other hand, current research, particularly by Daniel Sinier and Françoise de Ridder, in their article Voboam: Inside perspective demonstrates that Voboam guitars were originally built with a minimum of internal barring and support on the back and ribs resulting in a distinctive sound that has been obscured by subsequent modifications.

The easiest way to access this important article is to search "Voboam inside perspective" and view the PDF as a Quick View.

The Smithsonian website is difficult to navigate, but finding more photos of the the Voboam guitar pictured above is rewarding. In your search engine type Smithsonian ID number MI*65.0591 and follow the results.